The move for the renaming of Warri to WADO City has taken a new twist as Google Officially Renamed  Many Parts of Warri to WADO City.
Following the recent argument between the Itsekiri and Urhobo people of Delta State over who owns the city of Warri and the recent crown of their (Itsekiri) King HRM. Utieyinoritsetsola Emiko–Ogiame Atuwatse lll, the Urhobo Sons and daughters have on their part, changed the name of their territories in Warri to Wado City.

It was discovered that Google LLC has officially renamed all Urhobo Cities Under Warri to WADO CITY in their maps.

Popular Right Now
48 Powerful Prayer Points for Breakthrough With Scriptures
By his stripes we are healed: Yes, by his stripes, you are healed
3 Most Dangerous Psalms No Enemy Can Withstand
Ejes Gist News confirmed with residents in Udu, Agbasa, and other areas of the city that it is the result of a conflict over ‘who owns the city,’ which has been raging for several years between the two major ethnic groups.

Below are some of their social media post and photos: 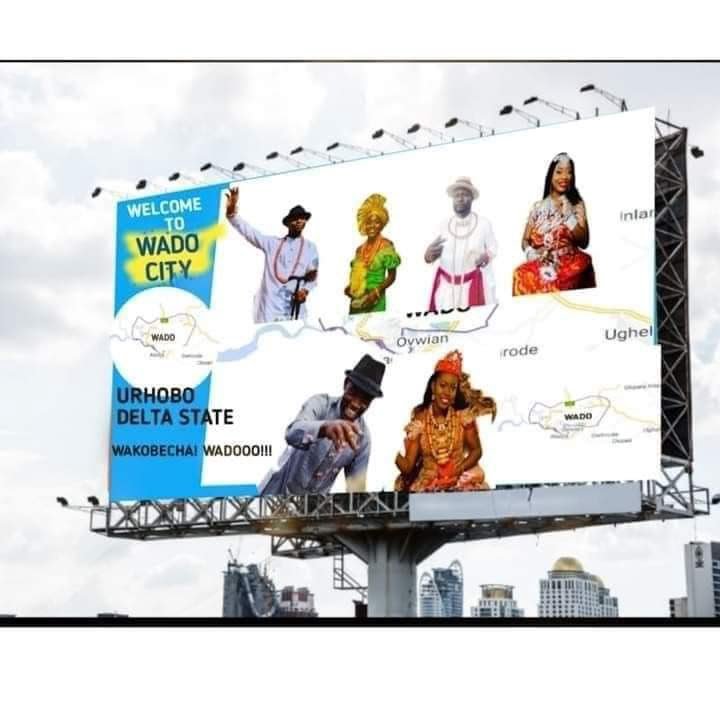 While a name may sound innocuous, it represents an individual’s identity. It not only identifies a person, a place, or an object; it also resonates with the bearer. In our climate, each name carries a distinct vibration that is spiritually potent.

Countries all over the world have changed their names to reflect their historical origins and to demonstrate their identity.

These names are with us today.

People are known to even change their names to reflect their current status… Onajite becomes Enajite, ….. Ediri becomes Ufuoma

So when people are no longer comfortable with WARRI and now advocate for a change, it is a well thought out process for change is the only permanent thing.

WADO as a city will remove the ambiguity and give the owners THEIR TRUE IDENTITY.” 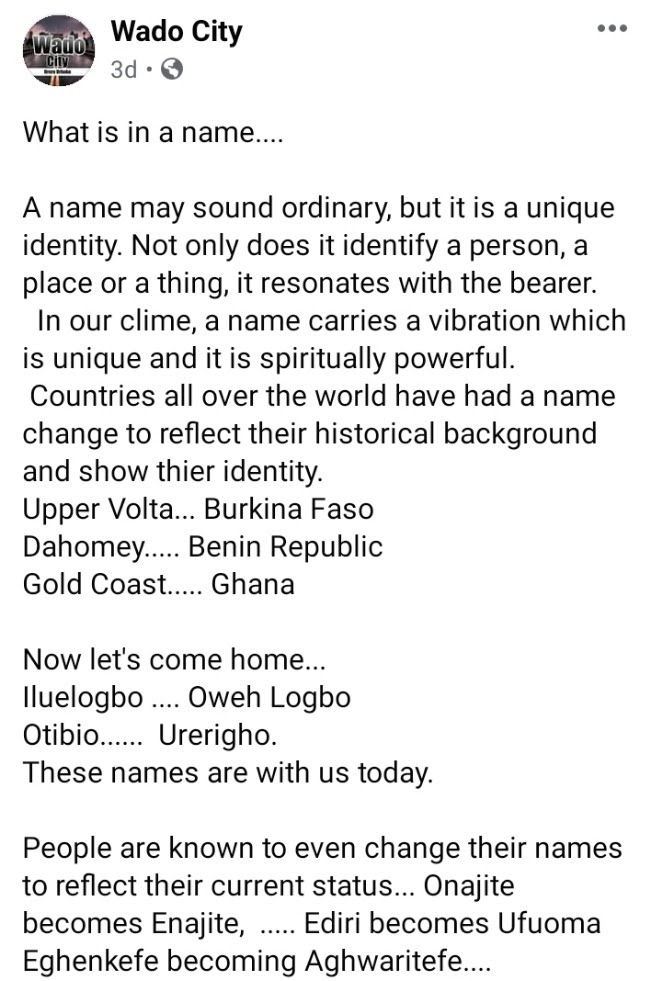 “Did you know that the new name for our territories, Wado City, formerly known as Warri, is gaining tremendous popularity since the majority of Urhobos are so intrigued by it?

When some Nigerians proposed declaring Lagos State a no-land man’s in the past, Awolowo rallied Yorubas and declared that Lagos would be declared a no-land man’s over his dead body because Lagos gives the Yoruba race relevance.

However, the same Awolowo left his Yoruba homeland of approximately 1000 kilometres to rename the Olu of Itsekiri, the Throne of his first cousins, to the Olu of Warri after the White man who founded the city in Urhobo land refused to name their Olu as the Olu of Warri because Urhobo owns the land known as Warri.

Awolowo could not stand up to Lagos being declared a no man’s land to commit similar crimes in other territories.

Awolowo didn’t want to lose his identity, but he desired that others do. We must rename Warri, as Wado City has established itself.

We are capable of accomplishing this. We don’t even require a government or political leaders. With a billboard in the heart of Warri, it is accomplished, and every other anomaly in our territories falls into place easily.

Wado City, our City formerly known as Warri is a reality. 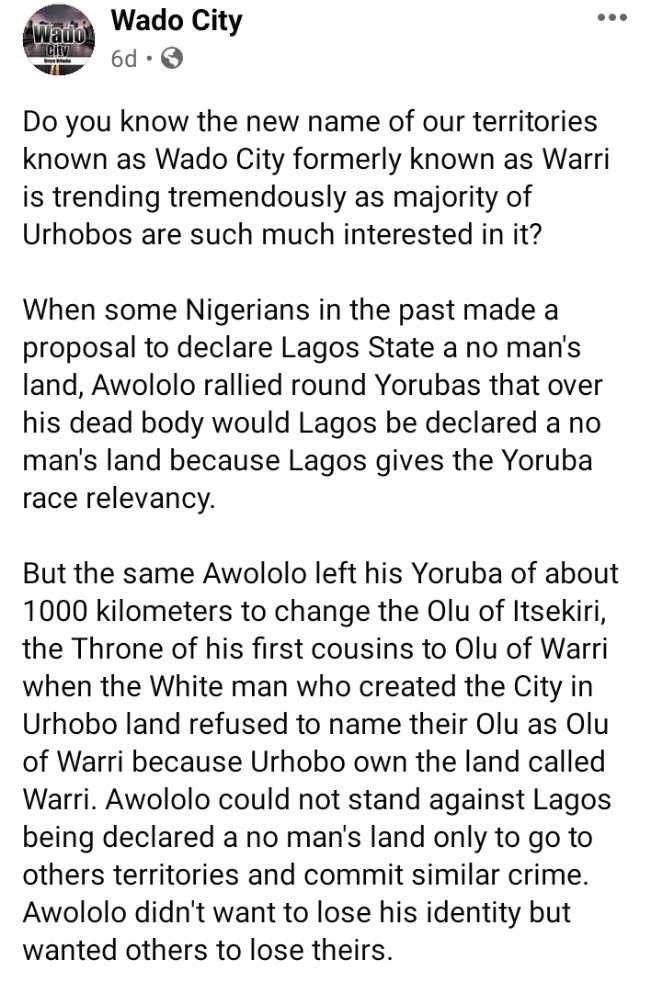 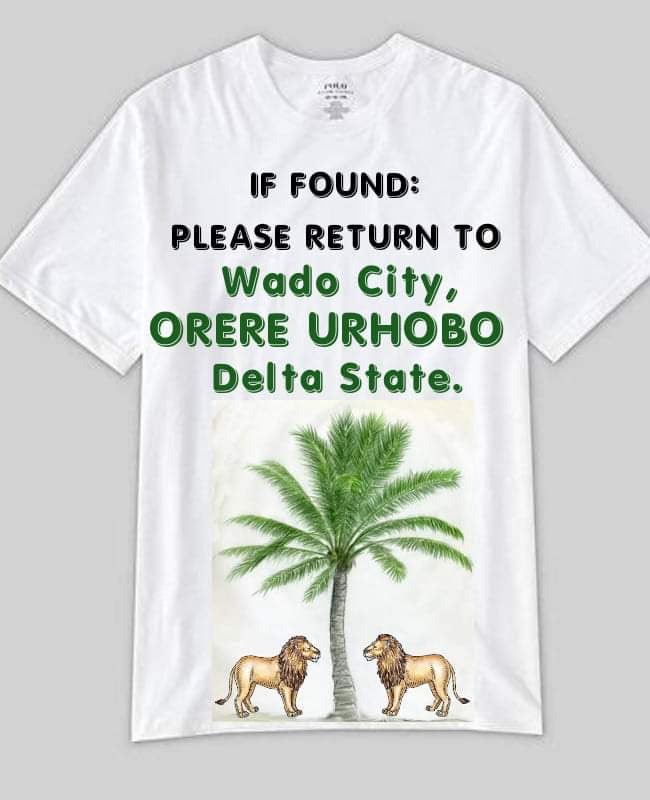 Uvwie is not Warri; Lawmakers Ban the Use of Warri in Uvwie

Embattled Ologbotsere Spitfire, Says  Prince Tshola Emiko is not the Olu of Warri