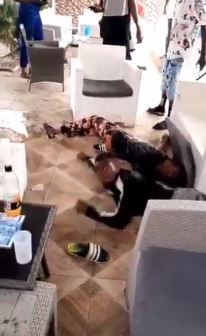 A young man has left many people shocked and worried after he was seen swimming on the bare floor as a result of hard drugs.

He was seen rather awkwardly trying to swim out of the house using his bare hands.

He had reportedly smoked hard drugs prior to the moment. Water was being poured on his head to calm him down.

Heartbreaking Story How Man Was Blinded By Aiye Cultists For Refusing To Join Them In...