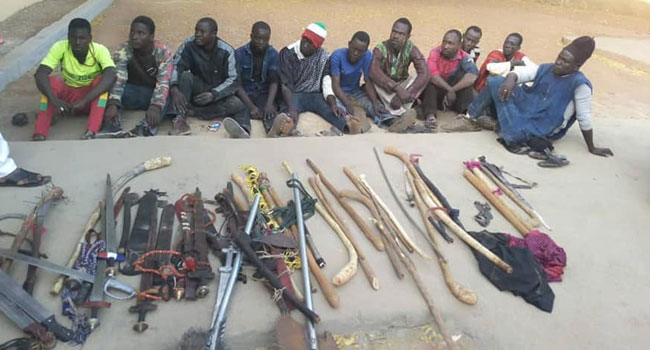 Bandits in Katsina have been given a 48-hour ultimatum to unconditionally release all kidnapped persons in their custody or face the full wrath of the law.

The Secretary to the State Government, Alhaji Mustapha Inuwa made the declaration while briefing newsmen on the outcome of an extraordinary meeting held with relevant stakeholders.

READ ALSO:  I will lift not less than 100 million Nigerians from poverty – Buhari Boast

Mr. Inuwa while warning bandits said that this would be the last meeting the government will have with them to advocate for peaceful co-existence between them and the larger society, stating that the state government will no longer grant an excuse to bandits who breach the peace accord.

“For those repentants who still abide by the dictates of the accord, the government would provide them a piece of land to relocate as no going back the military will soon resume in full force.”

YOU MAY ALSO READ : Rochas Okorocha, Apologies to APC, congratulates Hope Uzodinma, Ready to work with him

Other stakeholders who attended the meeting include the General Officer Commanding 8th Division of the Nigerian Army, Sokoto, General Aminu Bande, the repentant as well as representatives of some recalcitrant bandits from Katsina and Zamfara States.

Man Sentenced To Death By Hanging Over Murder Of MTN Staff