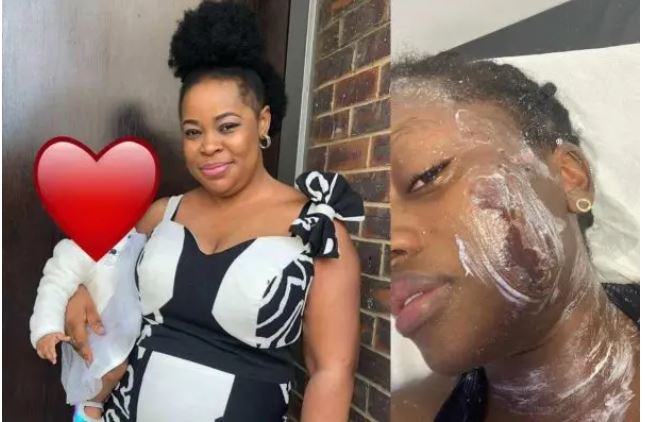 The wife of a bank manager, poured hot water on her step daughter, after her mother died of breast cancer few months back.

The 24-year old victim was identified as Amarachi Okey-Ezeala, and was bathed with boiling water by her step mother Mrs Ugochi Okey-Ezeala nee Anyadike.

According to News Express, a close family source said that Amarachi’s mother died from breast cancer in 2019, not quite one year, and her father decided to take Ugochi as a new wife.

Mr Ezeala and his family, lived in Dolphin Estate in Ikoyi, Lagos but relocated to Banana Island when he married the new wife, after the death of his first wife.

The new wife purported aggression got to a peak earlier today when she allegedly poured boiling water from a steaming cooker on her step daughter, Amarachi under simple provocation.

Taking to Facebook to write about the incident, Amanda Chisom wrote;

“Two different people contacted me on Saturday about a certain Mrs Faith Ugochi Okey-Ezeala who poured hot water on her step daughter Amarachi.

Amarachi is her step child and Faith was married after the death of their mother in 2014 and it has been a case of abuse till this particular incident.

What is paining me most is that she is not remorseful because she feels she is untouchable and the family is trying to keep it hush hush as if it is okay for a child to be walking about with scarred face because her mom died prematurely and her father got married again.

I want this woman and her husband arrested because as far as I am concerned , he is an enabler. Please help me tag all the relevant agencies to this post. I will provide the phone number of the man and his useless wife and their address too for immediate arrest.

Please help me tag the Lagos state commissioner of police and PRO and the IG too and Lagos state governor and wife of the governor , ministry of justice too.Help me share too, she must report herself to the police.”

‘He Asked Her To Remove Her Pant And Sit On His P*nis’ – Princess Gives...