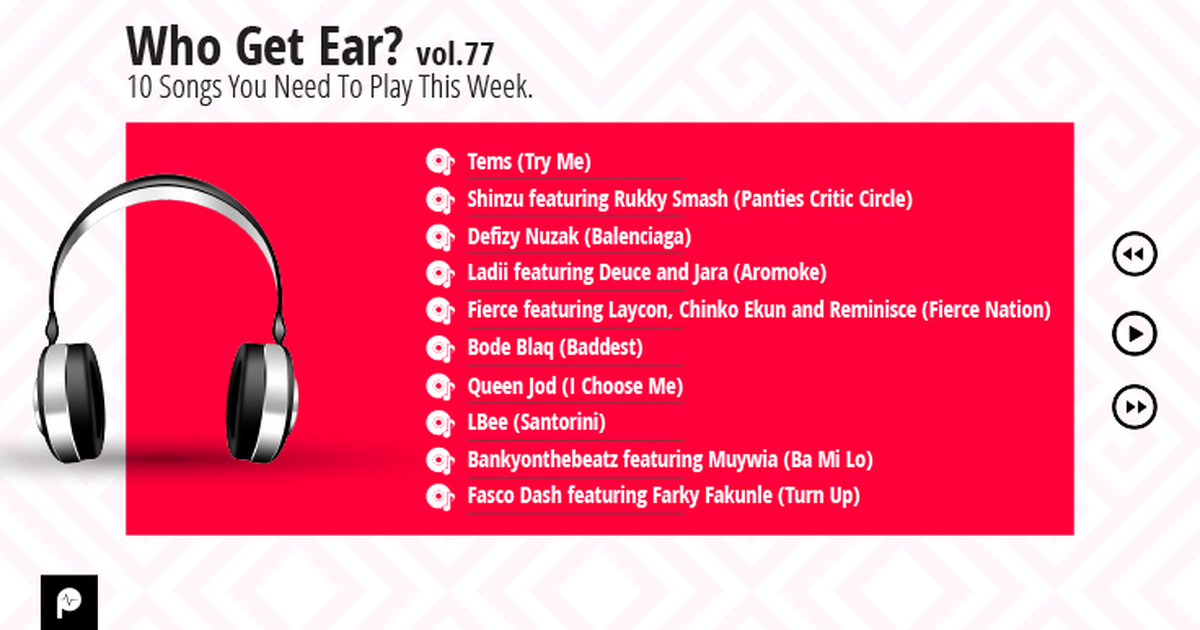 It is a weekly compilation of the 10 best songs you need to play this week from some of the best upcoming acts across Nigeria. Last week, we had D-Truce, Maka, Hengzie, IDYL and a few others.

It’s been a great week in music; Davido’s ‘Blow My Mind,’ a monster collaboration with Chris Brown hit seven million views in under one week and debuted at No. 3 on Billboard’s World Music Song Sales Chart. Wizkid’s ‘Brown Skin Girl,’ his feature by Beyonce was No. 1 on the chart.

You can play on Apple Music HERE.

Nigerian songbird is back again with this R&B number. After an excellent start to the year, this an excellently written piece of music about a dysfunctional love affair by Tems.

This is definitely the pick of a packed week.

A guitar ballad. Interesting vocals. The power of music. It’s another tale of dysfunctional love – sadly. Nonetheless, it is good music. The guitars chords are accompanied by a rich bass line that sees Shinzu trying to hold on to a slipping love.

On a trap/EDM number, these talented acts use the luxury of balenciaga to discuss the ubiquitous topic of money.

The beat is nice.

On a Hip-Hop song that starts with the ‘great,’ ‘it’s not you, it’s me’ tale, Ladii is a heartbroken and vindictive lover. A woman broke up with him to get with richer men and now, with the grass not greener on the other side, she wants to get him back.

While the beat is a little melodramatic, it’s a good song.

On a dubstep and lamba fusion popularized by the talented Pheelz, Fierce litters the beat with beautiful cadences and flows to complement the star quality he manages to co-opt for his track.

This number was released quite a few months ago. On a trap beat, Bode Blaq sounds like a Yoruba sugar daddy trying to toast a woman.

Queen Jod – I Choose Me

A ballad song that documents the defiance of needed feminism. Like every modern woman, Queen Jod questions why has to be anything for any man. She refuses to go overboard for him and instead desires for him to also make an effort.

There is no percussion, but this is a modern tale of enlightenment in a society fraught with toxic masculinity.

It’s a dance track and it’s one of those that require attention to blow.

But on its own, it’s an absolute banger.

This one dropped a little over a week ago. It’s the fusion of afro-house and lamba percussion. The talented Muyiwa Akhigbe takes the canvas he gets handed by Banky to profess his undying love.

The second best pick of the week, Alvin Brown should be proud of his EDM-inspired production for this one.

The beauty is in the production and it should be enough for any listener.

World Culture Day: What Is It, Activities, theme and Why Do We Celebrate It?