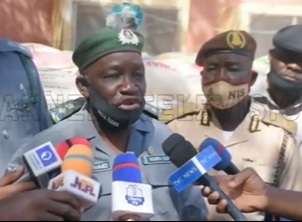 Customs officer during a press statement

Armed bandits collected seven bags of rice from men of the Nigeria Customs Service in Nigeria in order to spare their lives.

This was the disclosure made by a senior official of the Nigeria Customs Service, Comptroller Aliyu Mohammed, who is the Coordinator of the Sector 4 Command of the Joint Border Patrol Team in the North West.

He revealed this while narrating what happened when his officers met bandits in the bush.

At a press briefing in Katsina State on Tuesday, March 9, Mohammed said his men had gone to the forest in Dutsinma Local Government Area of the state to stop the activities of smugglers when they encountered the bandits who were taking shelter in the bush. He said the bandits who were friendly, asked for the bags of rice. Mohammed said to save their lives, they offered seven out of the 37 bags of rice seized from smugglers to the bandits.

”We (the operatives) seized 37 bags of rice and the bandits asked for seven bags before allowing them to pass and save their lives.

So, you see the risk we take but people, especially those living along the border communities engaged in attacking our officers” he said

Watch a video from the press conference below

Over 39 million Nigerians Will Be Jobless, Others Will Become Extreme Poor Because Of Coronavirus...