Some Nigerians’ search for wealth has taken on a new dimension with videos of some desperate Nigerians watching them bath naked in their tens on a river under the supervision of a so-called ” Prophet” When the initial video surfaced last week, Ejes Gist News thought it was one of those social media messages. 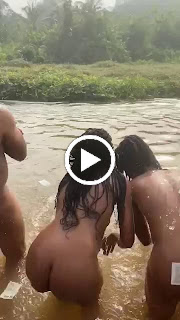 ALSO READ : Sunday Igboho dares Makinde, Arrest me if you can

But more evidence has shown that, with more people entering the ritual, it has become a regular occurrence. Behind the activities is Prophet Onyeze aka AKA Na Asu Uchu from Anambra State. His followers were told by the prophet that such a bath would make them extremely wealthy.

BREAKING: Buhari Jets Out To London For Medical Appointment

“Nigeria Look into our problem, we are dying,  No Helper” Police Officer Cries Out Bitterly...