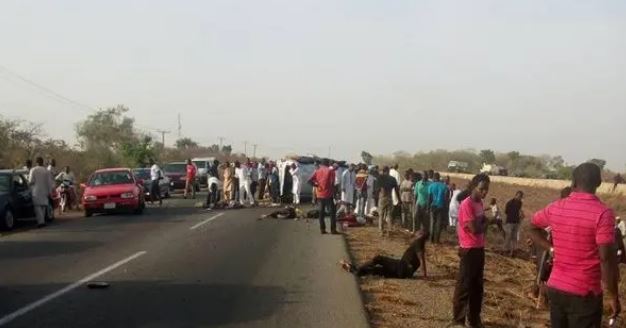 A tragic incident occurred as six travellers and six babies were attacked and killed as bandits laid seige along the dreaded Birnin-Gwari-Kaduna Highway.

According to reports, the victims were on their way to a ceremony at Doka, Birnin-Gwari Local Government.

Also, a total of 11 people were kidnapped by the bandits on the same day at Dan Kungi village in the Birnin Gwari Local Government Area of Kaduna State, PR Nigeria reports.

This was contained in a statement by the chairman of the Birnin-Gwari Progressives Union, Mr Salisu Haruna, on Monday.

The statement titled, ‘Alarming rise of banditry and killings in Birnin Gwari general area,’ added that more than 40 persons were abducted by the bandits between December 20, 2020 and January 4, 2021, adding that “some of them (abductees), have been reported terribly ill.”

The statement read in part,

“The New Year 2021 has begun in sorrow and tears for the people of Birnin-Gwari Local Government Area of Kaduna State.

“On Sunday, 3rd January, 2021, bandits laid siege on innocent travellers at Zankoro, along dreaded Birnin-Gwari-Kaduna Highway, killing nine people (including three infants) that are on their way for a ceremony at Doka, Birnin-Gwari LGA.

“Similarly, the bandits came out today, Monday, January 4, 2021 at the same Zankoro around 9am, shooting indiscriminately and abducting unspecified number of people and wounding six others that are now receiving treatment at Buruku.

“In the last two weeks, bandits terrorising the people of Birnin Gwari, especially those travelling along Birnin Gwari-Funtua and Birnin Gwari-Kaduna highways have become intensely aggressive as they continue to kill and abduct innocent citizens unabated.

“There are more than 40 abductees currently at the mercy of the bandits who were kidnapped between December 20, 2020 and Monday January 4, 2021; some of them have been reported terribly ill.