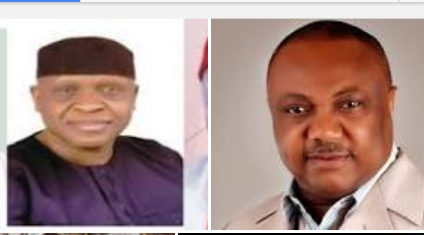 Against the backdrop of insinuations that the All Progressives Congress (APC) party in Delta State may adopt zoning as a way of determining the zone that will produce the next governor as has been the practice of the PDP, a leader of the party in the state, Olorogun O’tega Emerhor, has emphasized that APC will not stick to such approach but instead insist on a free and fair primary election to produce the governorship flag-bearer of the party 2019. Also in the same vein, the Senator Representing Delta Central, Senator Ovie Omo-Agege, has maintained that APC is poised to take-over Governorship seat of Delta State come 2019.

Emerhor gave this indication on the occasion of the enlarged meeting of APC leaders and stakeholders held at the Ughelli kingdom hall on Sunday October 22, 2017. The chairman of APC in Delta Central and State Vice chairman, Olorogun Adelabu Ejiroghene Bodjor had conveyed the meeting with a view to forging stronger unity among the leaders and stakeholders of the party.

According to Emerhor, the interest of APC will be paramount during the primary, adding that the interest of the party will be anchored on whoever that will be capable of winning the governorship for the party and occupying the Dennis Osadebey Government House, Asaba.

“In that free and fair primary, the interest of APC will be paramount.  How APC can win Delta State will be paramount.  Anybody who can take the party to Asaba will be the person we will cast our votes for.  The aspirant who have the capacity to win across the entire state will receive our votes.

“We are tired of being in opposition.  We will never be in opposition again.  Therefore, APC must win the governorship election of Delta State.”

Commenting on the suggestion that a committee be set up to forge cooperation and unity between himself, Senator Ovie Omo-Agege and Chief Great Ovedje Ogboru, Emerhor expressed satisfaction with the move, noting that the trio were brothers.

“A lot have been said in this meeting.  When references were made to me, to Senator Omo-Agege and Chief Ogboru, I know the reason why.  We are brothers.  As has been suggested here, if a committee is to be set up to enable three of us talk, it is okayed by me.  We must realize that many people who are here in this hall today are supporters of either of us.  If we are united and we are working together, our supporters will also work together. So I support the move.”

He however advised against quarrels and fighting among the youths, adding that “we cannot be talking of unity and some are fighting.  People should be allowed to air their views without being attacked.”

Emerhor, stressing on the importance of the forthcoming local government election to the party, expressed support for an earlier suggestion by Senator Ovie Omo-Agege for the APC leadership to pay visit to the newly-inaugurated board of the Delta State Independent Electoral Commission (DSIEC), adding that the visit was necessary to let the chairman and his members know that as an umpire in the Councils election, they must ensure it conducts a free and fair election.

He also used the occasion to suggest that in wards where capable aspirants of the party with prospect of victory in the local government election are identified but they have no money to buy nomination forms, the leaders of the party in the senatorial zone should pull their effort together and sponsor their purchase of forms.

Earlier, while addressing the capacity-filled hall, Senator Ovie Omo-Agege commended the convener of the meeting, Olorogun Bodjor, adding that it was necessary for such meetings to be convened on a regular basis for the sake of unity among party members and progress of the party in Delta Central.

He pledged his support for any move to promote the course of the party in the district, urging the Delta Central APC executives and members of the party not to hesitate to reach to him any time they need to discuss the progress of the party, adding that “my door is open.”

Senator Omo-Agege stressed on the importance of the forthcoming local government election for the party, adding that they will not allow Gov. Okowa to plant his surrogates in all the Councils as they used to do in PDP.

He said: “I’ve had several meetings with our leaders, Chief Great Ogboru on one hand and Olorogun O’tega Emerhor on the other hand geared towards ensuring that APC will not only compete but compete effectively and win in the next local government election.  We are determined to take the fight to Okowa as far as this local government election is concerned.  Therefore, as we all leave here, let the message gets across to the man that we are ready.

“Let me also send a word of congratulations to the new electoral body (DSIEC) set up. We will visit the leadership of that body and let them know of the need to be free and fair in the forthcoming election”, Senator Omo-Agege said.

In his opening speech, the chairman of the APC in Delta Central, Olorogun Adelabu Bodjor had disclosed that the purpose of the meeting was to foster unity among the leaders of the party in the area.  He called upon elected and political appointees to extend the hands of support and empowerment to other members of the party, adding that unity and commitment cannot be assured where those in authority and power keep to themselves and their families only.He assured that the meeting will be a regular event.

CORRUPT NATURE OF PDP AS A PARTY IS INCURABLE — ESE SANCO