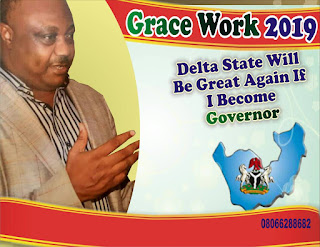 Despite the pressure on me and calls for me to align with the Anioma Agenda in APC,I have decided to keep on supporting Chief Great Ovedge Ogboru for obvious reasons far from self interest.
To be honest, Chief Ogboru is one politician that has been Consistent , Resilience, Selfless and Uncompromising to the core. No amount of money offered to him would make him sale or abandon his ambition. He knows what he wants and desires and he is
diligently seeking for it with his hope in God.
Overtime, he decided to always follow a genuine cause in pursuance of his ambition to bring TOTAL FREEDOM to the good people of Delta State without compromising his stand.
Apart from the fact that he had never yielded to money bags negotiation , he has always been focused and committed to achieving his mission and vision of being Delta State governor by God's grace. He has been following this cause with maturity without subscribing to violence even when it was obvious that he won his elections but was been robbed by the "ruling" PDP government , he had remained calm and law abiding citizen.
This great man has refused to either collect money or contracts from government or individuals to pursue his ambition but has remained resolute ever since on this struggle .
He is not among those people or politicians who join ruling cabals/cowboys with the aim of ripping or siphoning money from State confers .He is also not like some politicians vying for governorship who are/were major contractors to PDP, siphoned money and amassed wealth for themselves over the years thus benefitted immensely from the maladministration of the State .
Many of the people today yearning to be governors were part of cause of the downfall and problem of Delta State, many of them were awarded contracts in the State worth billions of naira which were not done, now they have come to APC for cover and want to be governor by all means to enable them continue from where they stop.
I believe that a corrupt man will always be corrupt whether in PDP or APC
Chief Great Ovedge Ogboru has remained Focused , Consistent , Resilience, and Uncompromising . He is not a corrupt person at all,hates cheating with passion and his types are rare to come by.
With this analysis , you will agree with me that the good people of Delta State can not afford to miss this rare personality who is ready to restore the lost glory of our dear State.
So , please join me to be among those Deltans clamoring for good governance irrespective of zone, ethnic , religion or senatorial background .
Hon Odikpo

CORRUPT NATURE OF PDP AS A PARTY IS INCURABLE — ESE SANCO

PDP Has Failed Even As An Opposition Party — ESE SANCO

ZONING AS A TOOL FOR ELECTORAL VICTORY: FACTORS APC MUST CONSIDER IN ITS CHOICE OF GUBERNATORIAL CANDIDATE IN DELTA STATE.