The news now is that the Taliban Forces have Seized control of the Presidential Palace in Kabul.

President Ashraf Ghani fled Afghanistan on Sunday, a top official said, effectively ceding power to the Taliban as they reached the capital Kabul to seal a nationwide military victory in just 10 days. 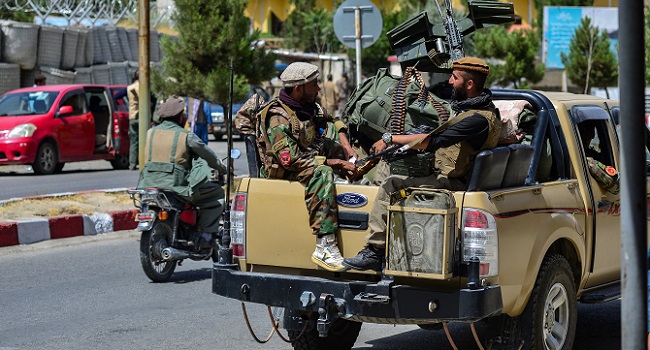 In a video posted to his Facebook page, Abdullah Abdullah, the chairman of the peace process, said, “The former Afghan President has left the nation, leaving the people to this situation.”

“God will hold him responsible, and the people will be judged.”

He didn’t say where Ghani was going, but Tolo News, a major Afghan news organisation, speculated that he was travelling to Tajikistan.

The Taliban had demanded Ghani’s resignation throughout months of peace talks with the government, but he had firmly held to power.

The Taliban have made a rapid sweep across the nation in just over a week, with forces unable to retain areas without US military assistance.

The rebels have stated that they seek a “peaceful transfer” within the next few days, two decades after US-led forces overthrew the government in the aftermath of the September 11, 2001 attacks.

Earlier on Sunday, the organisation issued an order to its members not to enter the capital, claiming that protection would be provided by remnants of the government’s military.

Later, a Taliban spokesman stated that to preserve law and order, Taliban troops should invade regions left by Afghan forces.

“God forbid the common thieves and robbers in Kabul mix, the abusers do not harm the people,” the Taliban stated in a statement. “The Islamic Emirate ordered its forces to enter the areas of Kabul from which the enemy fled.”

“Theft and robbery are a possibility.”

Thousands of police officers and other members of the armed forces have abandoned their stations, uniforms, and even guns, raising worries of a security vacuum in the capital.

With the aid of hundreds of troops sent to the city to assist with the evacuation, the US began transferring its people and Afghan employees to Kabul airport.

On the other hand, Secretary of State Antony Blinken downplayed parallels to the tumultuous US exit from Saigon in 1975 on Sunday.

“The truth is, we went to Afghanistan 20 years ago with a single mission in mind,” he added.

“It was to deal with the terrorists who attacked us on September 11th. That mission was accomplished.”

The Taliban’s impending takeover in Kabul has sparked dread and terror among locals who fear the group’s harsh version of Islam.

Afghans and the US-led alliance that has invested billions into the nation over the last two decades have been stunned by the size and pace of the militants’ assault.

President Joe Biden has authorised the deployment of an extra 1,000 US soldiers to Kabul to assist in the emergency evacuation of embassy staff and thousands of Afghans who served with US forces and now fear Taliban retaliation.

This is on top of the 3,000 American soldiers that were deployed in recent days and the 1,000 who remained in Afghanistan after Vice President Joe Biden stated in May that the US military presence in Afghanistan would be completely removed by September 11.

Given the failure of the Afghan military forces, that move has drawn increasing criticism, but he argued Saturday that he had no option.

“I was the fourth president to lead an American military presence in Afghanistan, following two Republicans and two Democrats. I would not, and would not, turn this conflict over to a fifth-generation,” Biden said.

The militants overran the anti-Taliban northern bastion of Mazar-i-Sharif and the eastern city of Jalalabad on Sunday, leaving Ghani’s administration entirely isolated.

The takeover of power occurred after government forces surrendered or fled, as it did in most of the other conquered cities.

The majority of the warriors looked to be young, implying that they were either newborns or unborn when the Taliban was deposed in 2001.

Panicked locals flocked to banks for the second day in a row as the Taliban closed in on the capital, seeking to extract their cash.

Many people had already accepted the Taliban’s ascension to power.

“My only hope is that their return will bring peace to the world. All we want is that,” said Tariq Nezami, a shopkeeper in Kabul.

On Sunday, a worker was seen whitewashing billboards for a beauty parlour featuring a glamorous bride.

The overwhelming mood among the tens of thousands who have sought refuge in Kabul in recent weeks has been one of apprehension and fear.

A doctor from Kunduz who came to the capital with his 35-person family said he intended to return.

“I’m afraid there will be a lot of fighting here,” says the author. I’d rather go home, where I know it’s stopped,” he told AFP, declining to be identified.

Ghani, a professional economist and professor, has been the president of Afghanistan since 2014. He was re-elected in September 2019 but was not sworn in until March 2020 owing to a lengthy procedure.

He used to be an American citizen, but he handed up his citizenship in 2009 to compete for the presidency of Afghanistan.

Between 1983 until 1991, Ghani taught anthropology at Berkeley and Johns Hopkins University in the United States before joining the World Bank. He was working at a multinational financial organisation in Washington at the time of the September 11 attacks, and he utilised the tragedy to re-engage in Afghan politics, returning to his homeland two months later.