Morayo Afolabi-Brown, a media figure, has advised the terminated pastors of the Living Faith Church International, also known as Winners Chapel, to take their complaints to God.

Following news of the church’s pastors being fired, the TV anchor announced it on her verified Instagram profile @morayobrown on Sunday.

ALSO READ : Jubilation As Gallant Flight Lieutenant Abayomi Dairo returns to base after bandits shot down military jet in Zamfara

“God is the true MD (Managing Director) of any Bible-believing church,” she wrote. Take your grievances to Him, not the media, if you are fired. Only He, not the trolls on social media, can repay you.”

This came when a priest at the Winners Chapel, Pastor Peter Godwin, said that the church had fired him and nearly 40 other pastors in Ekiti State for failing to grow their parishes. 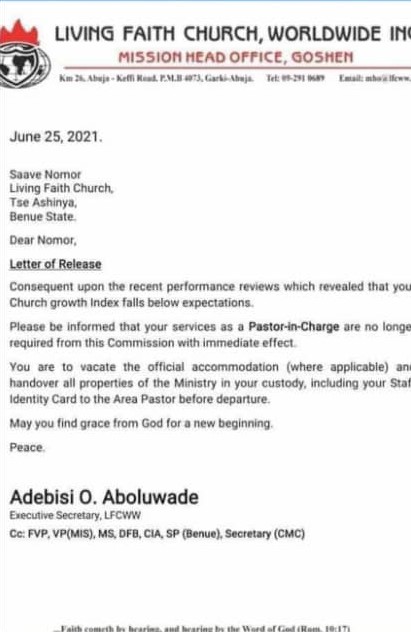 It was learned that the number could be far more than 40 across the country.

The pastors were requested to evacuate their official accommodation and hand over their identity cards to their respective area pastors in a letter that has been circulating on social media and is dated June 25, 2021 and signed by the church’s Executive Secretary, Adebisi Aboluwade.

Pastor Godwin, who claimed to be one of the pastors affected in Ekiti State, said he was hired on August 28, 2020, in a viral video.

He stated that on July 1, 2021, the state pastor invited him and about 40 of his colleagues to a retreat, but that he was fired for failing to increase the church’s earnings.

The pastor said he got a call on July 1 saying the state pastor wanted to meet him, and when he came, he was astonished to see roughly 40 other pastors.

“When I arrived there, I saw other pastors as well, almost 40 of them,” Godwin stated. As a result, I decided to join them.

“A few minutes later, each of us received a letter. I opened the envelope to see what was inside and discovered that it was a bag letter.

“So, the next day, I called management to find out what had happened because I hadn’t been involved in any questionable or wicked activities. The management assured me that the church does not operate at a loss.

“They also told me that the overall income generated from my station should be enough to cover my welfare and housing, thus I’m hereby sacked due to my poor income.”