The  SUG president of Federal Polytechnic, Ilaro, Ogun State, Adegboye Olatunji, has narrated how he ended up with cultists at initiation venue. 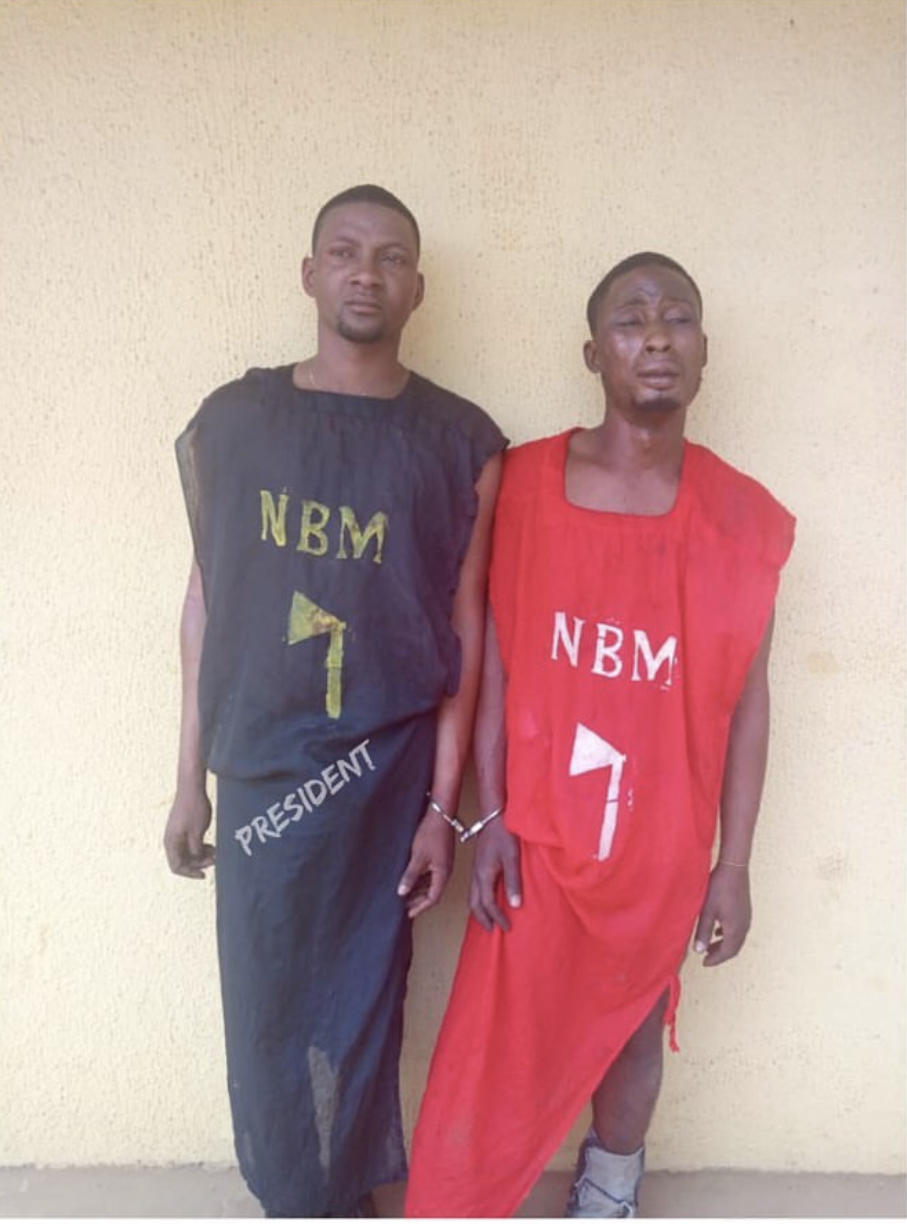 Adegboye Olatunji left after his arrest by the police
The Students Union President of the Federal Polytechnic, Ilaro, Ogun State, Adegboye Olatunji has denied being a cultist.
READ ALSO : Woman places curses on corpse of Nigerian man who died while allegedly having sex with side chick (video)
While speaking after his arrest, Adegboye said  he was charmed by unknown cultists and taken to the bush for initiation.
According Adegboye, he was on his way to the church when he lost his consciousness and found himself in the bush with some cultists, and later arrested by men of Ogun State Police Command.
He said this, on Tuesday, at the Police headquarters in Eleweran during a parade of 77 suspected criminals, including Adegboye for various crimes ranging from cultism, robbery, gun-running, murder and assault among others.
Adegboye was arrested on Sunday in Ilaro, Yewa South Local Government Area of the state with one Olanrewaji Taiwo for alleged involvement in cultism.
Less than 24 hours after the incident, the school management promptly suspended Adegboye and was later impeached by the Students’ Representative Council of the institution.
The state Commissioner of Police, Kenneth Ebrimson, who paraded the suspects, said, “He (Adegboye) was apprehended with his regalia and we have refused to let him pull off so that he doesn’t deny, and you can see it for yourself.”
Earlier during the parade, the Commissioner of Police, Kenneth Ebrimson, told journalists that the suspect had confessed to him during an interview that he is a cultist.
But when Adegboye was engaged by journalists, he promptly disagreed with the CP, claiming, “I never confessed any of such thing to him.”
He said, “Before I knew what was happening, they have started beating me. What I heard was that I know how to fight on behalf of students that house rent is high, that’s what I heard and they tore my clothes, put me inside the boot and took me to school.”

On his mission in the bush before his arrest, Adegboye said, “I don’t know how I got into the bush. I was charmed, I don’t know how it happened.
“I was going to the church around 7 am on Sunday, I left the school’s hostel. When I was leaving, I greeted the security man and told him that I will be back probably at 3 pm, that my brother called me to come for the service and I want to rush there.
“I sent a message to the choir coordinator of my church that I am going to Judah parish, in llaro, my Rector is also going to that church and he hates anything cultism.”
While expressing disappointment over the way he was treated by the school authority, Adegboye said, “They didn’t fight for me because they didn’t make their proper findings. If I was shot dead there, that’s how they will say that the SU president has gone.”
On his membership in a cult group, he said, “I don’t know anything about this. I’m not a member. When they brought this cloth, I wanted to drag it with them that the cloth is stuffy and it is not my cloth; it was the vigilante that sprayed pepper on our faces.
“I don’t know anything about this and I have been brought here, my school hates cultism or anything that will disrupt the academic calendar, so, we don’t even try to cause any riot.”
He also lamented that he was abandoned by his colleagues and the Rector of the school, saying, “Nobody to fight for me now except the National Association of Nigerian Students. Everyone has abandoned me.
“I don’t know what to do, why will my Rector abandon me without a proper investigation?
“Assuming that I’ve been killed, what will he be saying? What would have been the story?”
On whether his parents are aware or not, he said, “My parents are in Osun State and they are coming, I didn’t confess anything, all my statements are there.
“I didn’t confess anything, I don’t know anything about it, make an inquiry, they searched my room, while I’m still here, they didn’t find anything, I don’t go out, I stay in the hostel throughout.”
When he was asked why he did not go to the church with a Bible, he said, “The Bible is at Orita, I was going to Orita to get some documents also.
“Before I became the SUG president, I had stayed at Orita and some of my belongings are still there.”
When the other suspect, Olanrewaju, who was arrested alongside Adegboye, was asked whether he knew Adegnoye, he said he had never seen him before their arrest.
He also denied being a cultist, saying, “I am not a cultist, I didn’t see him (SUG President) before we were brought here.
“I swear to God who made me, I don’t know how I got to the bush.”
Watch video below:
Share this news: