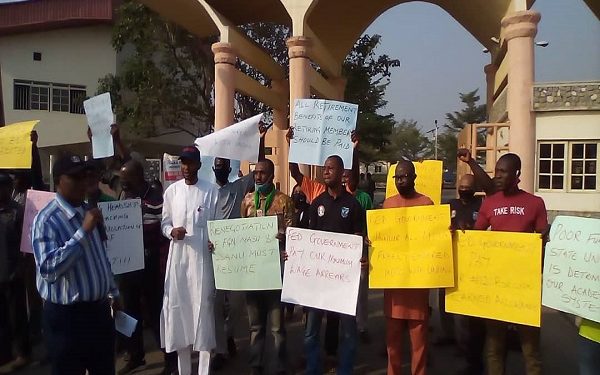 University workers under the aegis of Senior Staff Association of Nigeria Universities (SSANU) have made good their threat to shut universities after embarking on a three day protest.

The university workers at the Federal University Lokoja Kogi State on Tuesday held a peaceful protest to kickstart their three-day warning strike to the Federal Government.

As early as 8am, the placard- carrying university workeyts took over gates and other areas of the Adankolo campus of the institution.

In a statement by the chairman, SSANU/Joint Action Committee, Uche Onyedi, they threatened complete shutdown of the varsity should government fail to implement the Memorandum of Understanding (MOU) entered into by the parties.

It reads: “Gentlemen of the press, you recall that the JAC of NASU and SSANU had a 14-days warning strike which started from midnight of 4th of October and ended on 12 midnight 18th of October, 2020.

“As a result of the warning strike by NASU/SSANU, an eight point MoU was signed by JAC of SSANU and NASU on one hand, other stakeholders of the Federal Government on the other hand, at the instance of the Federal Ministry of LaLolbour and Employment, Abuja, on the 20th of October, 2020, in which a committee was constituted to look at our demands with a view to mapping out ways of solving them.

“Very unfortunately, the Federal Government renaged on its promises to implement the agreements contained in the MoU.

“You are aware that there are glaring inconsistencies in the IPPIS payment platform, non payment of allowances, non payment of arrears of minimum wage consequential adjustments, delay in renegotiation of the 3009 agreements, very poor funding of state-owned universities, lack of visitation panels to universities for a very long time, non payment of retirement benefits.

“We are asking the Federal Government to as a matter of urgency implement the MoU now, to avoid closing down the university for another year.”