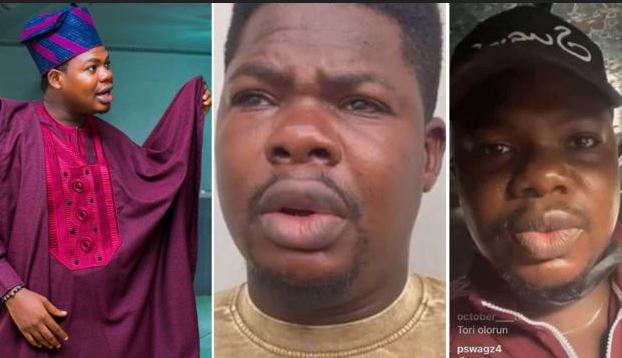 Popular Nigerian comedian, Mr Macaroni has given his two cents after Nigerians called out Governor Nyesom Wike for giving Burna Boy a land, money to build and promising to give all artists who performed at his homecoming concert N10m each last weekend while teachers were reportedly owed wages.

Recall that while many condemned the gesture, others hailed Governor Wike for the act.

Reacting to this, Mr Macaroni stated that some Nigerians only hate corruption, nepotism, impunity and bad governance when they don’t benefit from it.

He noted that while he has had conversations with some people who strongly opine that Nigeria can never be better, he has strongly argued that Nigeria will be better.

The comedian who also pointed out that 2023 is almost here, stated that politicians have already started off the ground work of using celebrities, social media influencers, kings of the streets and religious leaders.

He called on Nigerians to come together and hold leaders accountable.

“I see now that some of us only hate corruption, nepotism, impunity and bad governance because we do not benefit from it. Once we do, corruption is no longer black and white. It is color grey. We give corruption a new name and we even justify it.

I have had conversations with some people who strongly opine that Nigeria can never be better. And they say this with all conviction.. trust me to argue with all my strength and might that Nigeria will be better!! However, it seems we are caught up in one big circle.

A friend said to me “ Debo this one wey u dey do Na your business o.. if I enter government like this, me sef go chop national cake “ I was weak!! Because I know a lot of youths have this mindset. To some, Nigeria don spoil finish. Make we sef go chop our own.. is this the way?

Everyone has a right to associate with whatever political party they so desire. But when it comes to good governance, accountability, integrity and service to the people for a better Nation, we should never compromise on that! Never!!!

The way things are in Nigeria, our focus should be coming together to hold government accountable and making sure they do better. We as citizens must also not be found wanting because he who seeks equity must come with clean hands. Party loyalty should not lead to recklessness.

2023 is almost here and politicians would use us against us!!! They have started work already. From celebrities, to social media influencers, to the kings of the streets, to the religious leaders.. it’s one Big Giant Cartel!!! If we can’t evolve into a force, we become pawns!!

Person like me don talk say No APC or PDP!! And that’s a personal decision. I no follow anybody wey wan join the parties fight. If we all know what we are doing, we can collectively demand for good governance and work towards a better Nigeria. But we must evolve! We must!!

We must evolve into a force!! I have been saying this!! It doesn’t need to be a new force! We can join one whose integrity has not been compromised. But we must evolve. Or else we just keep complaining!! We give it our best and keep pushing until that force becomes The Force!!

This will give a lot of people like me who have been sitting on the fence for too long the chance to join hands with a movement that they can perhaps relate with. Some of us simply do not want to dine with the past or present government but then, we can’t continue to be quiet!!!

Corruption is Corruption! That you benefit from it doesn’t make the corruption any lesser than it is. You are benefiting from a corrupt system that oppresses, kills, and leaves your fellow citizens in abject penury, rejection and dejection.

The greatest want of the world is the want of Men- Men who will not be bought or sold; Men who in their inmost souls are true and honest.. Men whose conscience is as true to duty as the needle to the pole. Men who will stand for the right though the heavens fall. -Ellen G. White” 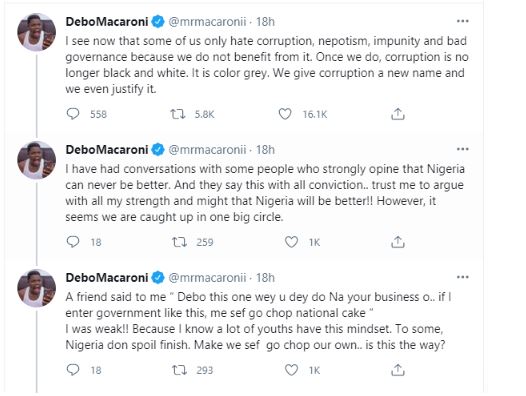