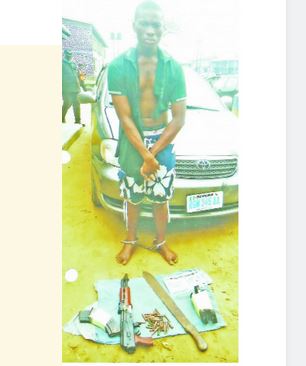 His name is Solomon John. He may not be as wise as King Solomon in the Bible. But at 23, he has succeeded in teaching every policeman and officer, especially at checkpoints, that the fear of Solomon John is the beginning of wisdom. Maybe not fear, but caution.

This is because he and his three-member gang specialises in killing policemen at the checkpoints and collecting their rifles and ammunition for use in robbery operations. But the Eagle Crack Squad of the Rivers State Police Command recently caused the fear to switch side when it arrested the notorious armed robber.

It later recovered AK-47 rifles, police arms and ammunition during the search of his house at Rumuokoro roundabout, Port-Harcourt, Rivers State. The State Commissioner of Police, Mr. Joseph Mukau, told Saturday Sun that the Eagle Crack Squad, led by its commander, Ibrahim Mohammed, and his operatives, stormed the hideout of the hoodlum at Mile 1 and Woji areas of Port Harcourt. There, they intercepted some criminals and recovered police rifles and ammunition. The criminals escaped, abandoning the arms and ammunition.

But the Squad made one of their biggest breaks when it intercepted a grey-colour Toyota Corolla Car with a Reg. No: Rivers RGM 345 AA. They found in it Solomon who had been on their wanted list and promptly arrested him. Though handcuffed, he later mysteriously escaped with his handcuffs. But police detectives later succeeded in re-arresting him. They later stormed his house and recovered one AK-47 rifle, batch no. 56-2512271, with five magazines and 33 rounds of live ammunition.

They also stormed the hideout of another gang leader called Chimezie Bright. Mukau explained that the two suspects and their gang members had killed policemen at their various duty posts and collected their rifles, which they later used to terrorize residents of Port Harcourt. The detectives recovered from Chimezie whose gang is notorious in Okuru community, Abuloma, Port-Harcourt, 10 police AK-47 rifles and English Beretta pistol.

How the anti-robbery squad arrested them

He added that the SARS Commander, Jovienus Iwuh and his operatives nabbed the suspects after raiding their hideouts in Ikwere, Rumuopi Ikom, Aba Road, Port-Harcourt.

“The Special Anti-Robbery Squad and the Anti-Cultism Squad raided all the black spots in Abonnema Town, Akuku Toru Local Government Areas of Rivers State and recovered over 30 AK-47rifles and 90 round live ammunitions from the hideouts,” he said. “Most of the criminals abandoned their arms and ammunition and escaped. It was a big task for the command when over 40 suspected armed robbers and kidnappers were arrested in various places in Port-Harourt: Eleme, Oyigbo, Mini-Okoro Omoku axis and recovered 10 AK-47 rifles, 20 pump action rifles and magazines. About 200 cartridges were discovered in their houses.”

Mukau warned criminals to relocate from Rivers State, vowing to deal with them “and we will not have mercy.”

He further informed Saturday Sun that the arrested suspects will be charged to court after the conclusion of police investigation.