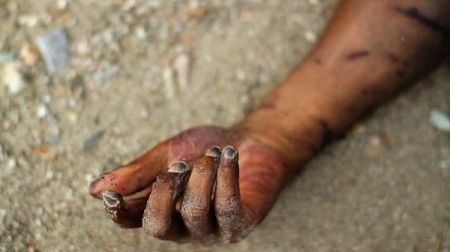 In what will come across as a really shocking development, a child christening party on Ojuwoye Street in the Mushin area of Lagos State has turned bloody.

The party turned bloody after some attendants stabbed a guest to death on the claim that he collected food more than three times.

The Lagos State Police Command, which confirmed the incident, said it had launched a manhunt for the killers and would do everything possible to bring them to justice.

SaharaReporters learnt that the deceased, 21-year-old Saheed Adesina, on December 12 went to the child naming ceremony at about 6 pm, which was the party time.

It was gathered that while at the party, trouble ensued when a collection of food started as the caterer, whose name could not yet be ascertained, accused Adesina of collecting food for up to three times, while others had yet to be served.

The action reportedly angered some of the party attendants, and it led to a brawl during which Adesina was stabbed to death.

According to a police report from the Area D Command, Mushin, the suspects took to their heels after committing the crime, and the party came to a shocking halt.

The police said, “The father of the deceased, one Adeshina Ismaila also of Ojuwoye Street, Mushin, reported to us that his son, Saheed Adeshina, of the same address, went to a naming ceremony. Trouble ensued when he was challenged over the collection of food for more than three times with the caterer.

“Suddenly, Saheed Adeshina raised the alarm that he had been stabbed at his testicles. He was later rushed to the Oliyide General Hospital, Mushin, where he was confirmed dead.

“The scene was visited by the Divisional Police Officer and a team of detectives. The deceased was taken to the Yaba General Hospital Mortuary for an autopsy, after taking a photograph. The suspects took to their heels after committing the heinous crime. Efforts are ongoing to unravel the mystery surrounding the death and to arrest the fleeing suspects.”