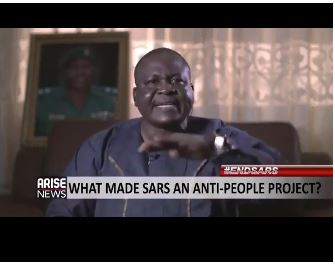 Colonel Hassan Stan-Labo (Rtd), a Former Military officer has reacted to the #EndSARS protest currently going on in the country to end brutality and extra-judicial killings by the force.

In an interview on Arise TV, Stan-Labo stated that SARS operatives are right when they say they will kill you and nothing will be done about it. He also queried the Nigerian Police Force on the investigations and punishments handed out after reports are made by Nigerians.

He also alleged that SARS officers operate with a high level of impunity as he shared a personal experience with an operative of the defunct police unit who disrespected him while on a road trip with his family.

Here is the video below;

be done about it – Colonel Hassan Stan-Labo (Rtd) comments on #EndSARS. He also alleged that SARS officers operate with high level of impunity as he shared a personal experience with an operative of the defunct police unit