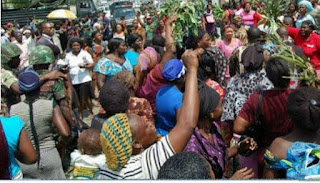 Sapele— A group of market women, yesterday in Sapele, protested the re-allocation of 1,532 units of newly-built stores at the Sapele Main Market along the Decima Road, which was gutted by fire recently.
The protesting women group, Eghwemese , decried what they termed "marginalisation and ill-treatment of Sapele women by the state and local governments in allocating Sapele Market stores.
Speaking through their leaders, Madams Rose Iwekwe, Ese Adikore, Katerine Umukoro, Ovo Abaku and Alice Atikpala, they said: "Our Sapele Main Market stores have been allocated to politicians and strangers by the local and state governments.
"We were the first group of traders to own stores in the main market, but now our market stores have been shared among politicians. Some of the allotees told us that it was the state government that approved and ordered the sharing of our stores to them.
"We do not know how to cope with this situation in the present economic hardship. We should not be undermined."
LG boss explains allocation to groups
On the other hand, the council chair, Chief Ejaife Odebala, said: "The council owns the market.
"The stores had earlier been allocated by the immediate past administration of former governor, Dr. Emmanuel Uduaghan, but a section of the initial store owners in the market, who felt marginalised, went to court in a bid to halt the allocation.
"When the present Governor, Senator Ifeanyi Okowa, came on board, five groups were contending for the stores and he set up a committee where all contenders were represented.
"The committee allotted 400 stores to the Akpeki Group, 400 to Ajueshi group, 500 to the local government, 200 to the various communities and 32 to the royal stool.
"The conflict subsided except for the Ajueshi group that has been submerged in trouble, contending with one another. They even went to court in a bid to halt the sharing."
Politicians are selling our stores, says 80-yr-old
One of the leaders of the women group ( Eghwemese), Madam Atikpala, said: "I am above 80 years old. When I was 15 years old before all these politicians were born, our mothers owned the stores in the market and they transferred them to us.
"Even when fire gutted a section of the market, our stores were saved. I'm still paying for mine till date, but suddenly the state and the local governments connived and shared the stores to politicians, who are currently selling each store for between N500,000 to N800,000.

We are Ready for Business Emefiele Charged Investors