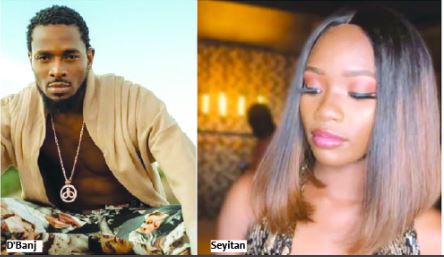 It becoming shambolic as accuser and the accused maintaining their claim.

With the accuser and the accused maintaining their claim over the r*pe allegation involving popular Afro-pop singer, Dapo Oyebanjo popularly known as D’banj and a young woman, Seyitan Babatayo, the police detectives investigating the trending scandal have resolved to retrieve the CCTV video recording at the hotel where the incident allegedly happened to establish the truth.

ALSO READ : Photos And Videos From The Night Of Tribute Held In Honor Of Late Ibidunni Ajayi-Ighodalo

Seyitan had accused D’banj of raping her at Glee Hotel in Victoria Island, Lagos on December 30, 2018 after attending a party at Eko Hotels. The police is presently investigating two petitions on the matter; one by the artist and another by the lady.

Saturday Sun reliably learnt that D’banj in an attempt to clear his name petitioned the IGP who requested a team of detectives in Lagos to investigate and unravel what actually happened. A source close to the musician said he took the step because he was at the verge of signing a multimillion Naira deal with a new generation bank in Nigeria and so needed to clear his name in order not to lose the brand contract.

In the same vein, the Inspector-General of Police, Mohammed Adamu, also ordered a probe into the allegations made by Seyitan in her own petition written to the IG by her lawyer, Mr. Tommy Ojoge-Daniel. The IGP directive is contained in a letter with reference number CB.7000/IGP.SEC/ABJ/VOl.484/801 signed by the Principal Staff Officer to the IG, DCP Idowu Owohunwa. The letter was addressed to the Deputy Inspector-General of Police, Force Criminal Investigation Department, Area 10, Garki, Abuja.

The letter written by the IG is titled, ‘Re: Petition Against (1) Oladapo Daniel Oyebanjo (Aka D’banj) for Rape, Indecent Sexual Assault, Attempted Assault on Miss Seyitan Temidayo’ It reads in part, “I forward herewith copy of letter dated June 5, 2020 received from Ojoge, Omileye and Partners on the above underlined subject. I am to respectfully convey the directive of the Inspector-General of Police that you treat. Accept the assurances of my esteemed regards please.”

Seyitan’s friend, Benjamin Ese, in a Twitter thread in early June had recounted the story of how D’banj allegedly raped Seyitan at a hotel in December 2018.

Ese noted that it happened at an all-white party where D’banj allegedly offered her friend some money to spend the night with him, an offer she rejected until he astonishingly showed up in Seyitan’s hotel room around 2 in the midnight.

“D’Banj drove all the way from Eko hotel where he was lodged and came down to Glee hotel in Victoria Island at midnight 2.40 am and collected the spare key from the receptionist,” Ese said in the thread, which has since sparked an outrage. She said D’banj allegedly “got into my friend’s room and forcefully threatened he would walk her out of the room naked, kept his fingers in her vagina and repeatedly raped her.”

Saturday Sun gathered that in his statement to the police this week, D’banj however admitted that he went to the hotel that day but simply because he wanted to see his boys who lodged in the hotel.  He added that he left the hotel hours later because he was to catch a flight to Ghana the next day.

Saturday Sun also reliably learnt that Seyitan in her own statement also maintained her earlier claim that D’banj indeed entered her room that night without her consent and raped her. She had earlier said that Franklin, D’banj’s manager at the time, invited her to an all white night party at Eko Hotels, on 30th of December 2018.

With both sides sticking to their claims and counter claims, a police source involved in the on-going investigation said, “The CCTV footage at the Glee hotel will go a long way to confirm who is telling the truth. We will be able to know if D’banj entered that room in the first place and if he did, how did he gain access into that room.”

Meanwhile, over 15,000 persons have signed an online petition calling on the United Nations to strip D’banj of his appointment as United Nations Ambassador for Peace.

They also called the attention of brands such as Heritage Bank Africa, One Africa, CSA Global, and other establishments associated with the artist to end their commercial relationship with him and stand in support of victims of sexual violence.

The petition, which was created by one E. Pooola on Change.Org had hit over 14, 000 as at Friday evening. It reads in part, “We call on the United Nations, and United Nations Women Africa organisations to remove Nigerian artiste Mr Dapo Oyebanjo as a youth ambassador and distance themselves from his actions following the sponsored kidnap of Seyitan who accused D’banj of rape and sexual assault which happened in 2018.

“Women in Nigeria are increasingly at risk of sexual violence and the United Nations and United Nations Women Africa as an entity committed to the empowerment of women should not be seen to associate themselves with alleged rapists, abusers, and kidnappers.

“We ask the United Nations and United Nations Women Africa to support and lend their influence in helping Seyitan get justice for the abuse she endured in 2018 and the harassment and bullying in the past weeks.”

Drama As Teachers Chase Out Pupils From Classrooms In Abuja (Photos)