As many Nigerians were celebrating the country’s 59 Independence Day in joy and happiness, residents at the Ndiegoro axis of Aba, the commercial hub of Abia State were facing the watched their homes burn and looted by police officers.

Our reporter gathered that several buildings in four streets; Okojombo, Anaba, Degema and Umuosi in Ndiegoro axis were set ablaze by police officers from the Ndiegoro Police Division in a retaliation for the colleague who was killed by some suspected cultists on Friday.

There were however, two angles to the story. One had it that the fracas that led to the death of the police officer popularly known as Alhaji on Friday came after a misunderstanding between police and some drug cartel at Ndiegoro over bribe(title) they usually pay to do their illicit business.

Another angle had it that the police officers who usually extort money from innocent residents at Degema by Okojombo met a wrong group who gave them a serious fight before one of the officers and a civilian who is their driver was killed.

When ABACITYBLOG visited the scenes, it was that of anxiety and suspicion as residents whose properties and means of livelihoods were destroyed crowded the streets in tears and pains. 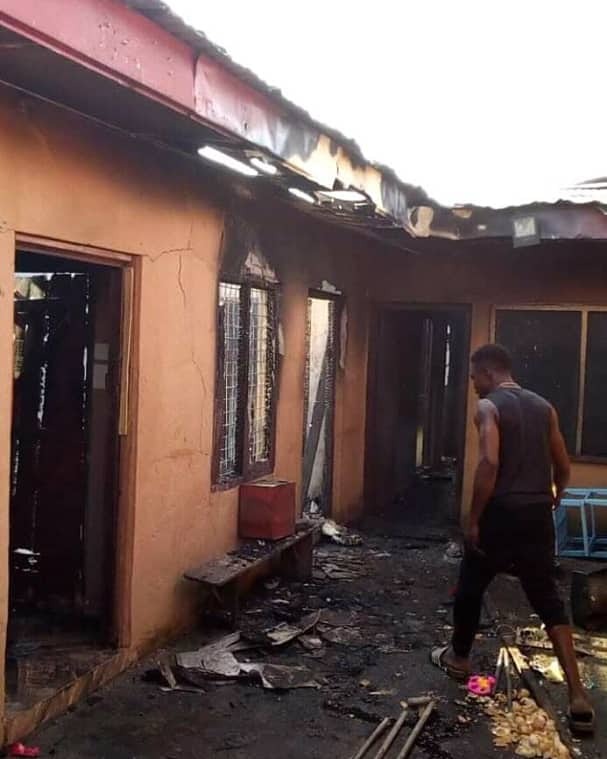 Ikechi Anyianuka, a victim in Degema Street told Naijawatchdog that the police has made him homeless and jobless as his workshop and home which is inside the same building at Okojombo was mercilessly burnt without a pin recovered.

“I’m homeless and jobless, thanks to the police. I don’t know what to do now. I lost all my properties because the boys that killed the police officer burnt the minibus used by the police not too far from my resident’s.

“We were all afraid and don’t know what happened. Why will the Nigeria Police punish us for an offence committed by people they ought to arrest. They even went as far as Uzomkpa in Owerri-Aba axis to burn a house.

“Just check the distance of Uzomkpa to where we are and tell me if this is not a calculated attempt by police to make some persons homeless.

“They entered my friend’s shop and looted every valuable thing there and still got some of his boys arrested. I wonder when boys turned this bad. Government should save us.” 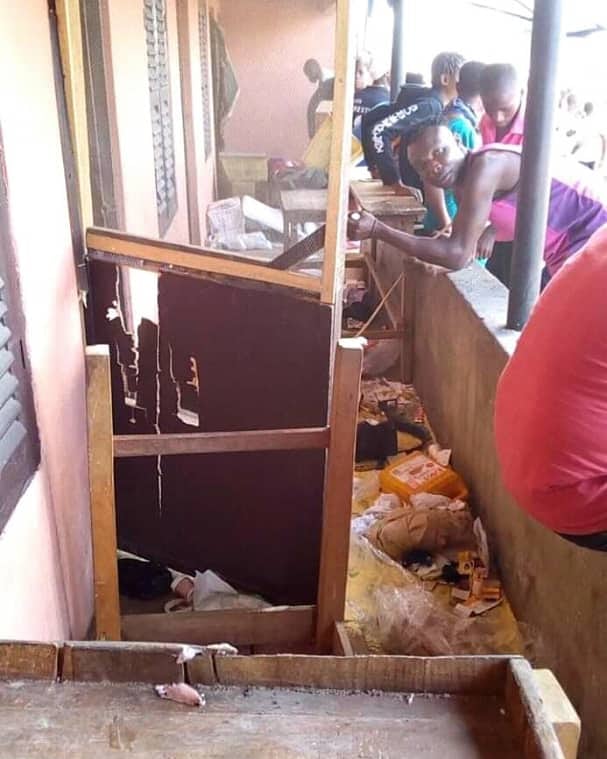 Nwachuckwu Nnamdi, said he managed to escape with his wife and three children before the police officers set their house ablaze without minding if there was still people inside.

“What happened here has no business with us that live here. Every evening when people are returning from market usually come to Okojombo junction by Degema collecting money from people.

“On Friday, they were doing the same thing around 6:15 in the evening when some group of boys from nowhere confronted them. It started with a fight when fight broke out between one of the boys and those police officers.

“Just like in the movies police began shooting but the boys didn’t have any scratch. They overpowered the officers and took their guns.

“The one that died was popularly known as Alhaji and it’s like he sustained injury during that fight and later died at Umuosi street few metres away from the scene of the fight.

“Those boys were parading the whole neighborhood until 8:30 PM without any presence of police. Immediately they left, police started entering the streets on massive arrests. From Massive arrest, the next thing we saw was burning of buildings.”

According to Madam Adaku Okpara, a victim and resident of Anaba Street, “I don’t know what we did to those police officers. We were not the ones that killed their colleagues. If police can burn, injure and loot peoples’ shops as they did in this area, then Nigeria is in trouble.

“As I speak to you, they whole landlords around Ibere street, Ibadan streets and even Onyebuchi are now living in fear as no one knows the next building the police will burn.

“The Federal and Abia State government should save us and the urge the police to fish out the real culprits because they will be somewhere waiting to attack again. 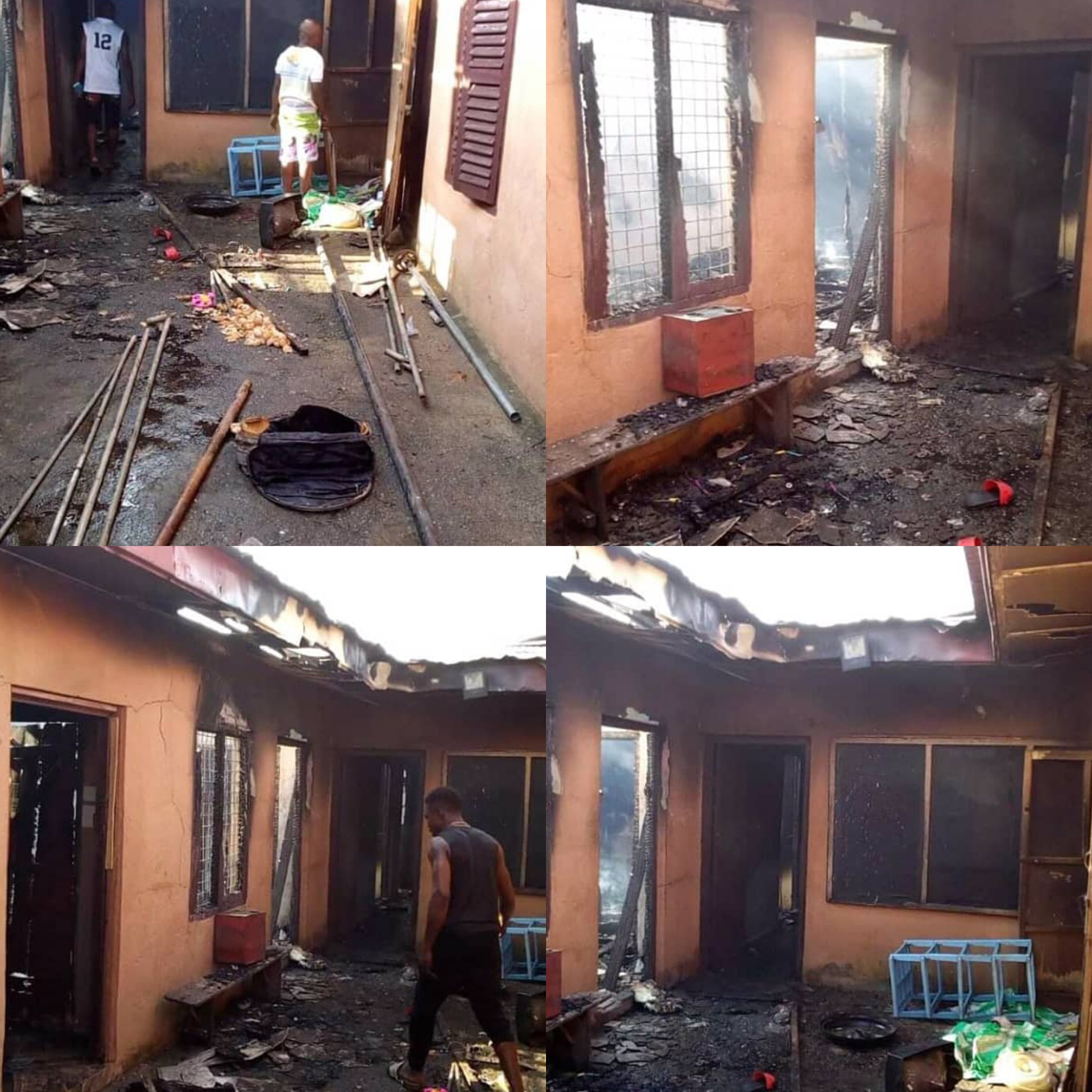 “How many buildings of innocent people will the police continue to burn? 10 persons where arrested in our compound and police took N100,000 from them.”

“Police support these evil boys and whenever things go wrong they pour the blame on the public. We all know what is happening at: Uzor-Kalu Bridge, Onyebuchi Street, Black Kingdom, York Street, Milverton by Park Road, Wilcox Memorial Secondary School and Over-Rail.

“Police go to these places to collect something and whenever their business goes wrong, they come our to talk. Who does not know how notorious Ndiegoro police station is? Who does not know their history in Aba? God will not forgive them for what they did to innocent people.”

When contacted, the Abia State Police Commissioner, CP Ene Okon denied the whole story and said that the police didn’t burn any house.

Okon went further to accuse the Ndiegoro Community of harbouring criminals among them and called their actions shameful.

He went further to say that even if the police officers were collecting money from the residents, it was not enough reason for them to kill the officer.

“Even of police came there to collect money does that warrant killing them? The group that did this where are they from? Is it not from the same community? The people burnt the buildings to cover their tracks.”

Meanwhile, the Abia State governor, Dr. Okezie Ikpeazu has reacted to the situation and urged all citizens to remain calm as his administration is on top of the situation.

In a release by Onyebuchi Ememanka, his Chief Press Secretary, Ikpeazu assured that the circumstances that led to the alleged destruction and torching of some houses around Ndiegoro Aba by some Police Officers yesterday are being investigated at the highest level of the Police Command in the country.

He stated that he is in touch with the Inspector General of Police and that the Abia State Commissioner of Police will be in Abuja this night to brief the Police High Command on this issue.

He reassured that his administration will not compromise the security of lives and property of our people under any guise, Ikpeazu advised residents of Aba to remain calm and go about their businesses without any fear, let nor hindrance, and allow government the latitude to conclude with security agencies to unravel the immediate and remote causes of the events of yesterday.

READ ALSO : “I’m not happy; I have only users around me”- Actress Ifu Ennada laments

Ikpeazu further assures that the plot by some criminal elements to upset the relative calm and peace in Aba has been uncovered by his administration working with security agencies, and made it clear that the security architecture in the State has been substantially beefed up, formidable and ready to secure our people.