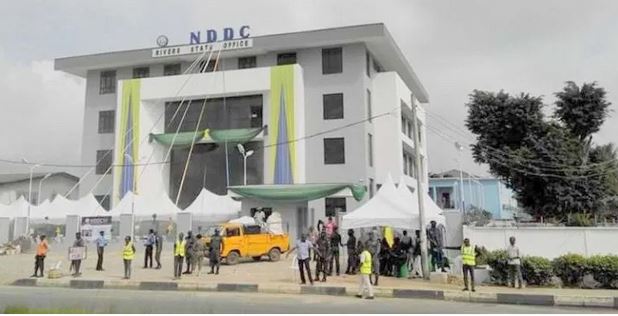 A Senate report has revealed how top management of the Niger Delta Development Commission (NDDC) paid themselves N85.6 million to attend a graduation ceremony in the United Kingdom at a time Nigeria was on lockdown and airports shut.

The report shows that approval for the funds was made in April – at the time when countries were on lockdown and flight activities suspended due to the COVID-19 pandemic.

The money was shared in April for a supposed trip in June, none of the officials travelled for the trip and none of them had returned the money as of July when the Senate investigated the matter, the lawmakers said.

This is one of the many revelations that emerged from the National Assembly’s investigation into spending by the NDDC, which has generated mixed reactions among Nigerians.

The Senate had, on May 5, set up a seven-member ad-hoc committee to probe the “financial recklessness” of the Interim Management Committee (IMC) of the NDDC. The committee was particularly asked to probe the IMC for allegedly squandering N40 billion in three months.

In the same vein, the House of Representatives Committee on Niger Delta commenced an investigative hearing on the alleged mismanagement of N81.5 billion between January and July by the commission.

There were accusations and counter-accusations from the investigative hearings conducted by the Senate and House committees in July, between some lawmakers and members of the NDDC, amid startling discoveries.

Besides how lawmakers allegedly ‘hijacked‘ NDDC projects and how the commission spent N1.3 billion for staff as ‘COVID-19 relief funds’, another revelation is how the NDDC spent a total of N85.6 million on the graduation ceremony in the UK.

This was contained in the report of the Senate ad-hoc committee obtained by PREMIUM TIMES. The Senate had on July 23 considered the report that exposed the ‘reckless’ and ‘budgetless’ spending by the IMC.

Top among the beneficiaries are the Managing Director, Daniel Pondei, the acting deputy director, projects, Cairo Ojougboh, another director, Luke Ibanga, and a Seledi Wakama who got the lion share of the fund.

According to the document, the NDDC account shows a one-off travel expenditure with the description tagged “Delegate to attend graduation ceremony of NDDC scholars in the United Kingdom in June 2020”.

The total cost of this trip was N85.6 million, covering 14 staff to travel to the United Kingdom. And the travellers include Messrs Pondei, Ojougboh and lbanga.

The report listed 14 beneficiaries paid different amounts for the ‘graduation.’ They are:

Two other beneficiaries were also listed in the overseas travel expenditure but for different purposes.

They are Ekpebu Lawrence who was paid N4.6 million for “participation at International Labour and Employment Relations Association in South Korea 2018” and Abgenglasede Nosa paid N3.6 million for attending “2019 Association of Certified Fraud in Texas 2019.”

The report said these payments demonstrate a form of internal control failure in the NDDC, especially with the management‘s choice to subject such transactions as cash payments to Individual staff. And that the corporate affairs department in collaboration with the Human Resource Department should have been responsible for direct payments for visas to the relevant embassies and airlines as direct cash payment to staff could be abused.

“It is also curious that these payments were made on the 17 April, 2020 at the height of the COVID-19 lockdown for a June 2020 trip. Obviously, monies had been paid to the 14 staff involved. There was no evidence that these trips took place as Nigeria and the United Kingdom were on lockdown during this period with all international flights and consular services by the UK High Commission suspended.

“The EIMC team explained that the trip was planned to take place In June and September without any consideration for the Covid-19 pandemic, therefore an early disbursement of fund (CovId-19 was already here in April!) was made to enable staff make timely visa arrangements,” part of the report read.

The committee however said since the trip “is no longer going to hold, everyone paid must refund the monies paid to them for the trip.”

This comes at a time many Nigerian students under the NDDC scholarship are stranded abroad because of the lack of funding from the commission.

PREMIUM TIMES had reported how the commission paid “scholarship grants” to Mr Pondei and other top officials rather than to the suffering students.

In May, the students wrote to the Senate President, Ahmad Lawan, complaining that life for them abroad has been compounded by the coronavirus pandemic which has prevented them from even engaging in menial jobs for survival.

President Muhammadu Buhari has, however, directed the NDDC to pay the fees and stipends of scholars of the commission who are facing hardships abroad.

Since the revelations emerged, individuals and civic groups have called for the prosecution of guilty NDDC officials as well as sanction of lawmakers who are complicit in the NDDC scandal.