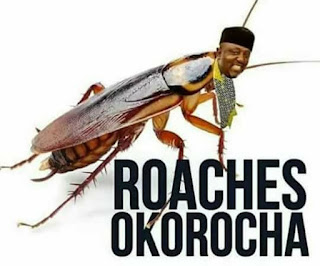 This man ways na wa sha!
REUBEN ABATI'S EPIC REPLY TO ROCHAS OKOROCHA
Dear Rochas Okorocha, you are the eight and ninth wonder of the world.
The eight wonder of the world should be Rochas's ability to sleep at night after stealing sleep from the eyes of the people who voted him.
The ninth wonder should be Rocha's ability to stretch his cheek muscles in a smile cum laughter that is obviously the cause of every anger in his state.
I'm not writing this to discuss the wonders of the world
I am only stunned in a helpless way.
Rochas Okorocha lost the weight of wisdom only to become a model of idiocy.
This man slammed the door against common sense and opened the window for stupidity to jump in.
I am not a prophet but I know a curse when I see one. I know what a plague looks like. I know the metamorphosis of madness. I know these things.
I know Rochas too.
It is no more news that one of the world problems of the 21st century was given a luxury of having a statue in a state inside a country that has lost countless citizens to his own police.
Jacob Zuma, South Africa's biggest regret, has a statue in the heart of a Nigerian state. The most shocking celebration of mediocrity in the history of the world.
I condemn with every fiber of my life the stark display of emptiness by the Roach.
Wait. A whopping five hundred million naira was invested in a statue that will be erected in a state with terrible roads. In a state where pensioners are ambassadors of poverty. A state in a state of emergency.
This is the height of priority misplacement.
He has etched his name on the dark pages of people's lives and feelings.
He is a con artist. IMO state is his canvas. He has painted chaos and ineptitude. He uses the tears of his people to dab on the painting – to make it emotional.
To you Rochas, you define shame more than every dictionary in the world.
To your followers and fans, it's sad to know that you sold your various consciences for peanuts that you can even get by predicting matches on bet9ja.
Shame on all of you and your generations".

Edo 2020: No Body can Stop My reelection – Obaseki Boast