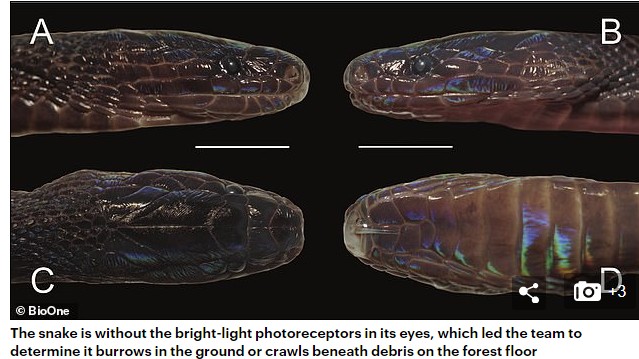 The rare snake was discovered in Vietnam

A new specie of snake has been discovered in Vietnam with scientists naming it Achalinus zugorum in honor of a late Smithsonian researcher.

According to Dailymail, the snake sports the odd scale patter and shines with an iridescent coloration; this is the only specimen of its kind that has been found in the world

A new species of burrowing snake has been discovered in Vietnam that sports the odd scale pattern and shines with a stunning iridescent coloration.

Called Achalinus zugorum, the reptile was spotted by researchers hiking through the karst forest while surveying other creatures in the area.

The snake is without the bright-light photoreceptors in its eyes, which led the team to determine it burrows in the ground or crawls beneath debris on the forest floor.

It is also part of a rare genus of burrowing snakes that branched from the evolutionary tree much earlier than other groups.

The discovery was made by researchers from Smithsonian’s National Museum of Natural History and the Institute for Ecology and Biological Resources at the Vietnam Academy of Science and Technology, the Smithsonian Magazine reports.

The team named the new species in honor of Smithsonian’s retired curator of reptiles and amphibians, George Zug, and his wife, Patricia Zug.

George is known for his contribution of mentoring students and Patricia supported him every step of his career.

Achalinus zugorum was found on a small gravel road near a small village and is the only known species of its kind.

The team collected the specimen six months ago, although they have made the announcement December 7, and have been unable to find more of its kind since. 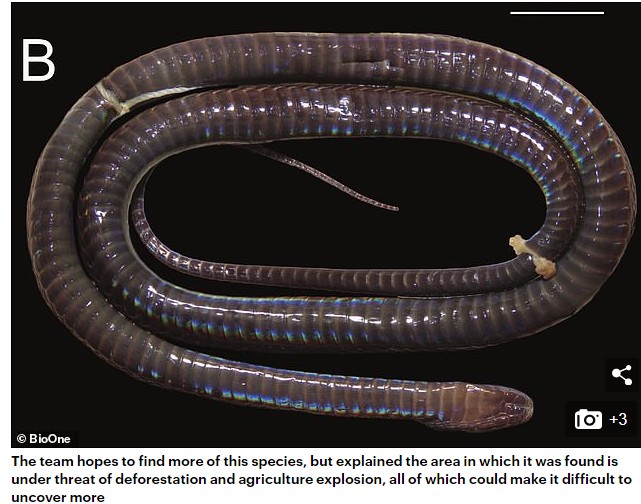 ‘Nothing is known about the ecology, behavior, diet, or preferred microhabitat of this species, though it is presumably a semi-fossorial species that was drawn out by recent heavy rainfall prior to collection,’ according to the study published in the journal Copeia.

The rare snake has a blackish and dark purple dorsum, along with a dark brown underside and strong iridescence coloration throughout its entire body.

Smalls scales also line the entire body and skin is exposed between the scales rather than being completely covered like other snake species.

Researchers took the snake to the Smithsonian where its DNA was sequenced, allowing them to confirm it is a species new to science.

The next step is to send it back to Vietnam, where it will be cataloged.

Truong Nguyen, the Vice Director of the Institute for Ecology and Biological Resources at the Vietnam Academy of Science and Technology, Told Smithsonian Magazine: ‘In 22 years of surveying reptiles in Vietnam, I have collected only six odd-scaled snakes.’

‘This is one of the most poorly studied groups of reptiles.’

‘As they conduct more biodiversity surveys, the group hopes to find other Achalinus snakes and learn more about their behavior.’

The team hopes to find more of this species, but explained the area in which it was found is under threat of deforestation and agriculture explosion, all of which could make it difficult to uncover more.