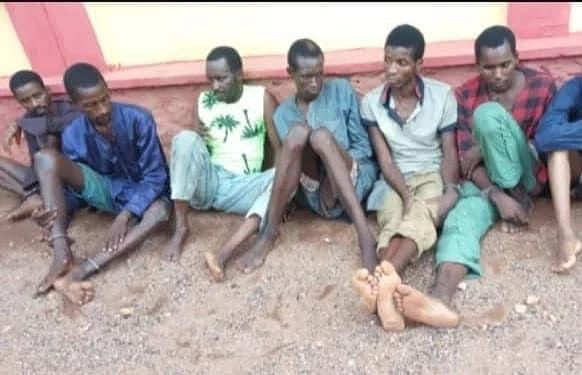 The suspected kidnappers of students of Olabisi Onabanjo University (OOU), Ayetoro campus and a community leader, Chief Tajudeen Omotayo, have been paraded by the Ogun State Police Command.

The two female students of OOU were abducted on March 14, 2021, at their hostel while Chief Omotayo was kidnapped on his way from a meeting in Ijebu-Ode on March 20. He was later released after undisclosed amount was paid to the kidnappers.

The Commissioner of Police in the state, Edward Ajogun, who paraded the suspects alongside suspected armed robbers at the police headquarters in Eleweran, Abeokuta on Wednesday, April 28, said they were apprehended two days after the students were released.

The suspects, Umaru Usman, Mohammed Bello, and Babuga Abubakar, 40, also confessed to a series of kidnap cases in the Ayetoro, Olorunda, and Imeko areas.

CP Ajogun disclosed that the suspects confessed that they were behind the kidnap of a doctor and a nurse on the Abeokuta-Imeko Road.

“They admitted to the kidnap of the two Olabisi Onabanjo University students in Ayetoro. They confessed that a female doctor and a nurse were kidnapped on 7th of April 2021 along with Olubo village along Abeokuta -Imeko road by them,” he stated.

They also confessed to kidnapping one Mrs. Yemi Ojedapo at Olodo village, who painfully, they had to kill because she recognized them.

“One Babuga Abubakar who is their informant confessed that he supplied information on victims to the gang for ease of operation,” he added.

The Commissioner of Police also paraded two suspected kidnappers behind the abduction of Chief Omotayo, the community leader in Imope.

The police boss said Nura Bello, 27, and his partner Abubakar Bello, 26, who have all confessed to the abduction of the community leader and also to several cases of kidnapping in the Ijebu area.