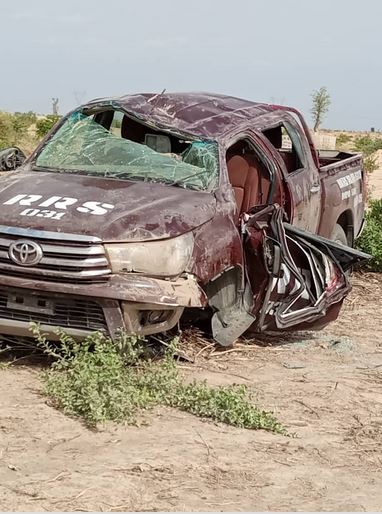 The police van that was reportedly destroyed in the attack
Some soldiers attached to the 7 division of the Nigerian Army attacked members of the Borno state COVID-19 committee, including two commissioners of Babagana Zulum, the governor, on Saturday, TheCable reports.

According to TheCable, the  trouble started after the vehicles conveying the soldiers and some civilians were stopped by the team enforcing the inter-state travel ban in Auno.

President Muhammadu Buhari had banned inter-state travel in May as part of measures to check the spread of coronavirus.

Kakashehu Lawal, commissioner for justice, and Salisu Kawaya-Buram his health counterpart, who are members of the committee, said the soldiers pointed guns at them even after they introduced themselves.

Lawal alleged that the soldiers forced their way into Borno from a neighbouring state, pulling down the barricade and allowing travellers who were not on essential duty to enter the state.

He said soldiers in three Hilux gun trucks, who claimed they were on a mission to repel Boko Haram attack on Gubio, deliberately rammed into a Rapid Response Squad (RRS) van which was used to block the road to prevent illegal entry.

He said the force with which they rammed into the vehicle made it somersault while all the four persons inside the van sustained injuries.

There are unconfirmed reports that one of the four persons on board lost his life at the hospital but TheCable could not independently verify this. 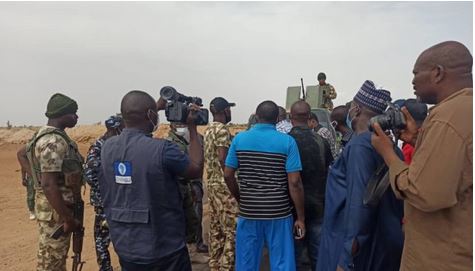 A press briefing on the incident
“After hitting the vehicle, the soldiers pointed their guns at us and began assaulting us,” Lawal said.

“One of the soldiers looked at me and said: ‘To hell with Democracy, Useless Democracy’. Others raised their guns at us, while one of them removed the cap of a policeman attached to the team.

“A cameraman attached to the team from the deputy governor’s office was also attacked and beaten while his camera was seized by the soldiers.”

Lawal said despite the provocation, he asked the policemen in his team to remain calm.

“As Nigerians, the mission and vision of the Buhari led administration and also the Chief of Army Staff, is to save the lives and property of the people,” he said.

“So we cannot just allow a chunk of military men to cause any form of harassment when people are there on their official responsibility.”

Kawara-Buyam said the soldiers allowed travellers who were not screened to enter the state.

Highlighting the danger posed by this, he said the state has recorded more than 400 coronavirus cases from travellers who came in illegally.

“Yesterday alone, more than 40 persons who travelled into the state were COVID-19 positive,” he said.

Usman Kadafur, the deputy governor who is also chairman of the COVID-19 committee, described the incident as unfortunate.

Sunday Igbinomwanhia, garrison commander, 7 division, apologised to the COVID-19 team over the incident and promised that the issue would be investigated.

This is not the first time that soldiers would clash with members of the COVID-19 team.