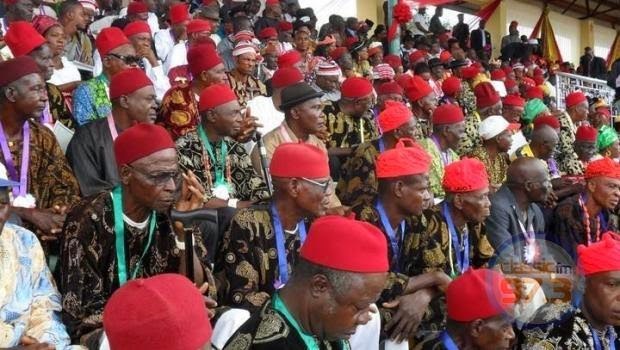 As the South-East are lobbying support from other parts of the country to produce the next Presidency after President Muhammadu Buhari in 2023.

Many are of the opinion of who will fit the position. Some said Igbo should chose between Biafra and 2023 President. The likes of Junaid Muhammed, a Northern elder statesman has charged the Igbo to produce a credible candidate or forget the presidential position.

Reacting over the statement, Ohanaeze youths council worldwide have said the group will present someone with pedigrees of the likes of Dr Nnamdi Azikwe and Chief Samuel Mbakwe, who sees Entire Nigeria as his Constituency.

ALSO READ : Kalu Laments , what Nigerians believes about our Allowances, Remuneration is fake

This was contained in a statement signed by Mazi okechukwu Isiguzoro President General Ohanaeze Ndigbo Youth Council Worldwide, which quoted Junaid Muhammed as said Nnia Nwodo knelt down before a Northern politician soliciting for supports.

“Junaid Muhammed revealed that Chief Nnia Nwodo knelt down in the house of Lawal Jarfaru Isa, former military administrator of Kaduna, accompanied by a delegation from Enugu over his Presidential bid, and those around there laughed at Nwodo, because according to Junaid Muhammed, North doesn’t support begging Culture and many of his contemporaries from South East are tied up with the civil war, which makes Him feels that there’s no body in the South East who is qualified for taking a shot at the President 2023,

“Igbo Youths understood the viperative rethorics of Junaid Muhammed, Using the antics Nnia Nwodo style of politicking in 2003, when he ran for Presidential ticket of ANPP, which was won by General Muhammadu Buhari, to haunt the genuine aspirations of South East of taking a shot at the 2023 Presidency, having been a marginalized zone in the scheme of things in Nigeria project of today, Junaid Muhammed’s antics is dead on arrival.

“Igbo Youths wishes to remind Junaid Muhammed, that South East will not be provoked by the traps and pitfalls set up for few Northern Elders against the popular Choice of supporting a Nigerian President of Igbo stock with a Northerner as Running mate, who never participated in the Nigeria/biafra War, and We’ll not remind Junaid Muhammed that Quality Candidates will emerge from the South East who are in the same pedigrees of the likes of Dr Nnamdi Azikwe and Chief Samuel Mbakwe,who sees Entire Nigeria as his Constituency, based on the numerical strength of igbos existing in all the 774 LGAs of the Country, and will surely address the fundermental issues of almajiris which the likes of Dr Junaid Muhammed had failed to address from begging on the Streets of the North.

“Igbo Youths wishes to assure Dr Junaid Muhammed, that Chief Nnia Nwodo will not be among the Presidential materials we will Present in 2023 Presidential race, and We’re are strict on Age and acceptability of whoever Igbos will project in 2023 among the current Governors, former Governors,Senators and legion of respected Sons and daughters who had international statue, that equals the Great Zik of Africa,in terms of antecedents and reputation,

“We will assure Dr Junaid Muhammed that we will get him a New wife immediately the National Committee on 2023 Igbo Presidency Project financed by Ohanaeze Ndigbo Youth Council in diaspora, will be inaugurated in November 1st 2019, with the Sole aim to activate all men of conscience to support a President of Igbo stock in 2023.