The People’s General, Chief Great Ovedje Ogboru, an APC  Gubernatorial Aspirant and the symbol of freedom in Delta State, calls on all APC faithful and his teeming crowd of supporters across the state to remain calm and focussed, that no amount of distractions can deter us from our goal. 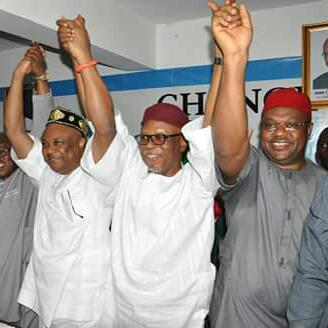 In his words, “We have a vision, we are on a mission to restore the lost glory of Delta State, no amount of distractions, or any form of cheap blackmail can stop our collective resolve”

Chief Great Ogboru admonishes all true progressives across the state to remain steadfast and resolute, that the time has come for Delta to be liberated. The People’s General whose determination and persistence can be likened to that of great leaders like Abraham Lincoln of the United States and our great President, Mohammadu Buhari, is a true leader with unwaivering integrity. He is a man of courage and valour, a true hero of democracy, a man of honour, who has dedicated his life to the  service of humanity and for the course of his people.

Like no other, his name alone rakes in votes even in remote villages where he has never reached, truly he is loved by his people. Today APC faithful across the state celebrate him. We bless the name of the Lord most high, for giving is a true leader, who feels the pains of the common man, a leader who understands the plight of his people, a Commander of the people, the Liberator, the hope of Delta. No wonder he is called “The People’s General” truly he commands respect amongst his equals.
Deltans can’t wait for the People’s General to bring back their smiles come 2019.

Unbelievable! How 3 Wizards Pretending To Be Chiefs Were Mobbed By Angry Residents