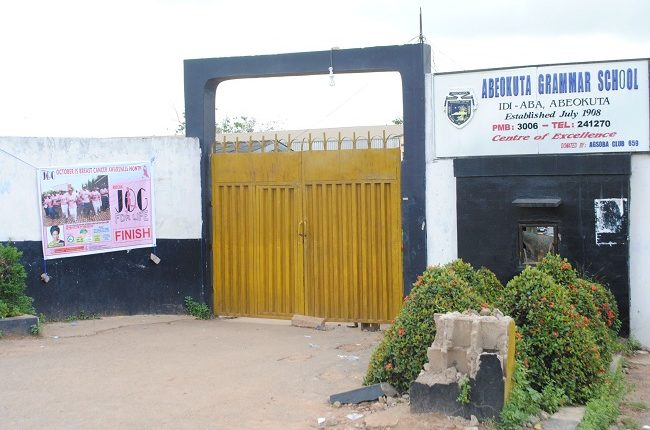 Often called the first grammar school in Nigeria, Abeokuta Grammar School is a secondary school in the city of Abeokuta, Ogun State, Nigeria.

It is currently located at Idi-Aba area, Abeokuta.

The first secondary school established outside Lagos, it is a popular school known for its history, academy excellence and producing some of Nigeria’s finest.

Abeokuta Grammar School is attended by students from all parts of Nigeria, the West Coast of Africa, South Africa, Europe and even Asia.

Here are some interesting historical facts about this great citadel of learning that might interest you.

On 23rd April 1908, the Abeokuta District Church Council resolved to establish the institution that is today known as Abeokuta Grammar School (AGS)

The school became operative at a site in the present-day Ijemo Agbadu, Abeokuta on 16th July 1908.

In December 1908, the Christ Missionary Society moved the school to the Igbein site. The boarders lived at Barrister Moore’s compound in the area between Ilogbo and Ijemo Agbadu.

In those early years, the boarding facility was elitist. Nonetheless, it was an integral part of Abeokuta Grammar School since its establishment in 1908.

The foundation stone of the Igbein site was laid by Sir Salter Edgerton, KCMA, the governor of the Southern Protectorate of Nigeria whilst the then Alake of Egbaland, Oba Gbadebo 1(1854 – 1920) humbly carried the first stone for the laying of the foundation on 21st December 1910.

It was first a ‘boys only’ school but it became a ‘mixed school’ in 1914, having entered its students for their first external examinations (Royal College of Preliminary Local Examinations) three years earlier in 1911.

In 1945, AGS had the best overall results in Mathematics in the Cambridge School Certificate Examination in the whole of West Africa.

In that examination, David Omueya Dafinone (1927), a Sapele boy, brought honour to the school when his grade was adjudged to be the best in West Africa. An achievement that won him a scholarship to study in the University of Exeter (and later in the University of Hull)

In the fifties, AGS students unofficially named the Igbein site, the ‘University of Igbein’. The mentality was such that a Form One student of the school perceived himself or herself as superior to a Form Five student of any non-AIONIAN school. In 1958, AGS acquired the status of HSC school, one of the very few schools in the whole of Nigeria to attain that feat.

AGS was at the Igbein site until 1976 when it finally moved to its new site at Idi Aba. It was to the credit of Igbein that it hosted AGS right from the time the pioneer students started off classes in the first (uncompleted) building there. Abeogramms was in Igbein for over 65 years!

The new site at Idi Aba was acquired shortly after the first Nigerian military coup d’etat in 1966. As at the time, the 1975/80 sets were admitted as students in AGS in 1975/76 academic session, Idi Aba was host to only Forms 1 & 2 students. It had a supervisor (Baba Odusote) reporting to the school principal at Igbein, at the helm of affairs.

Abeogramms was named as one of the model secondary schools in Ogun State in 1996.

In the past, AGS has participated and excelled in competitions such as the Principal’s Cup, Alake Coronation Competition, Grier Cup, Aionian Games, Empire Day Competition etc.

Oludotun was at a time the Principal of AGS and he had Kuti Hall (of residence) named after him in UI in 1954.

Olufunmilayo attended AGS and ended up getting married to a famous principal of the school. In 1968, UI bestowed upon her an honorary doctorate degree in law.

Olikoye had his secondary education in AGS, making his mark as a very brilliant student. He had his university education at UI and Trinity College, Dublin.

The old students association of Abeokuta Grammar School is known as AGSOBA. In the formative years of the association, it was known as ‘Igbein Sokediles’

The school has ever since maintained a high standard in both academic and social extracurricular activities which is quite evident in the entertainment industry today with some A list artiste being past students from the school, students like the popular Kizz Daniel, Fire Boy DML, Tunde Kilani and many more of them.

Sweet Love: Man Takes Girlfriend On A Helicopter Ride To Propose To Her (Photos)

Nigeria Has Entered The Second Wave Of COVID19 – PTF