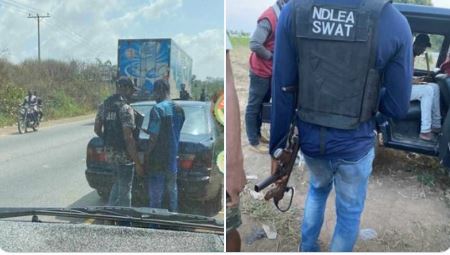 NDLEA SWAT men stopping Nigerians to check their phones on the road, are not authorised to do so, chairman of the agency, Col. Muhammad Mustapha Abdallah said today.

Abdallah said,  the trending images of NDLEA SWAT, behaving like the disbanded SARS, by stopping vehicles and checking phones is not allowed.

“The Agency does not check people’s phones without due official authorisation. Even that is done in the office not the streets.

Abdallah: NDLEA SWAT team not authorised to check phones on the road

“Phone searching, I repeat is not a street duty we ordinarily undertake”, he emphasised.

Abdallah also enjoined concerned Nigerians to demand the ID of NDLEA SWAT men, whenever they crossed their path.

“All NDLEA personnel have official identification. Please demand for it”, the retired colonel said..

Recall Social media users have called on the government to immediately disband a rogue security operative with the name NDLEA SWAT seen searching phones on the highway.

This is coming months after Nigerians protested against SARS which led to the disbandment of the group.

Nigerian musician and activist, Ruggedman shared photos of the security operatives, queried authorities on why they are on the road with guns and searching peoples phone.

See some tweets below;

Dear @PoliceNG @PoliceNG_CRU @ndlea_nigeria what is NDLEA SWAT and why are they on the road with guns searching peoples phone?#WhatisNdleaSwat

Who heads @ndlea_nigeria? It’s best to shutdown this madness now before it gets messy. The citizens will not take lightly to this and a reasonable admin will not worsen an already bad situation. Arrest these rogue officers and prosecute them for armed robbery & kidnapping. 🚔 https://t.co/FfEHh46nmm