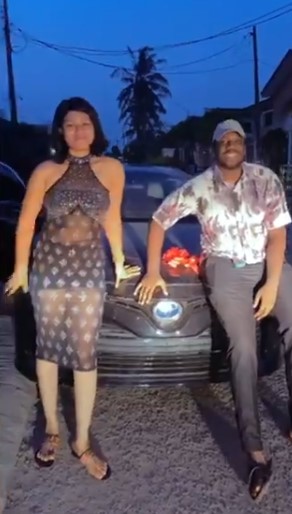 The man gave his girlfriend a car gift

A lady has received a surprise car gift from her boyfriend.

Her man who is a Nigerian digital strategist and influencer surprised her with the expensive present on valentine’s day.

The man identified as @Chemicalbrodar on Twitter, bought a brand new Toyota car and presented it to his woman on February 14.

He recorded a video of the moment he showed her the brand new car, which he described as a little Valentine’s Day gift.

In the clip, the young man used his hand to cover her eyes as he led her from inside the house to the street where the car is packaged.

According to him, the car was bought for her so that she would no longer be taking the bus. The excited girlfriend could be seen hugging the car and her man in appreciation of the gift.

Little Valentine’s for her gift so she doesn’t have to use the bus again 🚘🥰❤️ pic.twitter.com/0FGlS4Uc5H