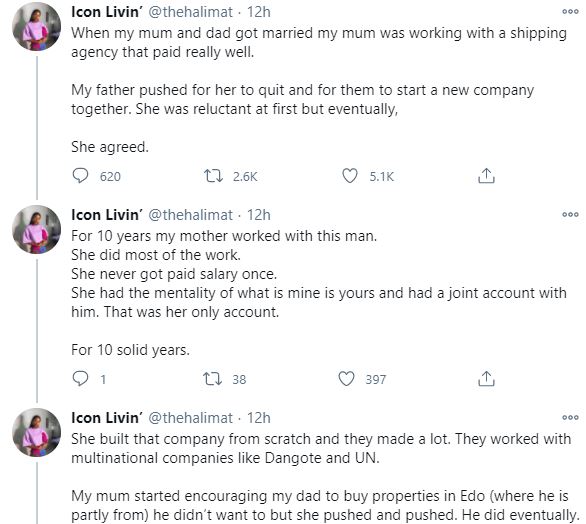 A Nigerian lady took to Twitter to recount how her mother almost lost everything to her step-brothers after resigning from her workplace to build a company with her deceased father.

According to @thehalimat, her mother was working with a shipping agency that paid really well before getting convinced by her father to quit the job and join him in starting a new company together.

She disclosed that the horror of losing everything her parents worked hard for began in January 2020 after she lost her father.

“When my mum and dad got married my mum was working with a shipping agency that paid really well. My father pushed for her to quit and for them to start a new company together. She was reluctant at first but eventually, She agreed.

For 10 years my mother worked with this man. She did most of the work. She never got paid salary once. She had the mentality of what is mine is yours and had a joint account with him. That was her only account. For 10 solid years.

She built that company from scratch and they made a lot. They worked with multinational companies like Dangote and UN. My mum started encouraging my dad to buy properties in Edo (where he is partly from) he didn’t want to but she pushed and pushed. He did eventually.

He first of all started with a family house. Now keep in mind my father had a previous wife who had two sons Aliyu and Aziz. After he built the family house he bought a quarry then properties for a big hotel. About two acres.

He eventually woke up one morning and left. He left my mother with not 1 dime. He cleared out the bank account and left. My mother had to rebuild and she did.

January 13th 2020 my father died and that was the beginning of the horror. I was never allowed in meetings with regards the burial and Fidau prayer. My step brother Aliyu outrightly told me to forget feminism and I had no place at the meeting.

Being my fathers first daughter and favorite for the longest I was livid. But I came to terms with the tradition and reality. I wasn’t even allowed to watch him get buried. Anyway, we left to go back to school.

We came back for the fidau prayer and we started talking about inheritance matter na so kasala burst. My mother went to the bush barn to ask my eldest brother (step brother and first child) about some burial rites regarding goat blood and all of that.

I immediately went to ask my mother what happened because I try my hardest to not be impartial family or not. She told me them I went to aziz to ask for his own side of the story.

Na so aziz slap me. He slapped me and dragged my top out. Some members of the community were there and my fathers domestic staff. My whole breasts were out. Aziz dragged me on the floor while kicking and beating me and my leg hit one of the railings.

My fathers driver joined him. Hafiz my younger brother came in to intervene and separated us. I had already started having a crisis at this point. Aziz then tore hafiz shirt and started hitting him.

They threatened to shoot us and all of that. 4am the next day we got into the car and made our way back to lagos in fear of our lives. It wasn’t up to two weeks later we got a call from my fathers friend that Aziz and Aliyu had sold one of dads car and property.

These boys didn’t ask other branches of the family before they did so. We were so upset so we called them and asked for it to be split according to Islamic culture. They cut the phone on us. Keep in mind this was Lm my mother’s sweat and work.

Next thing Aziz and Aliyu had sold two other properties. Give us our portion in the proceeds. They didn’t pick our calls nor reply our texts.

Now we had to pay school fees my mother hasn’t been working for a bit and my savings wasn’t enough for the school fees. We called and begged and pleaded they never responded to us. Instead they’d insult us and curse us out. We eventually rant to the traditional ruler there.

Keep in mind they had all the title documents to all the properties my father had. We held a meeting with the Auchi Inheritance committee and king only for Aliyu to get up and tell them to remove my mother because she never contributed to my fathers life.

I was so upset and I fought. No wahala. The properties were divided in accordance to Islamic law and we tried to retrieve our own share and properties. Na so Aziz and Aliyu sell all of them and swallowed the money. They stopped picking my mothers calls and texts.

While all these were going on I had to deal with mourning my father, final year and heavy depression with work stress because school fees wouldn’t pay itself. There were nights I cried. One property was left which was my fathers hotel.

The plan was for all three branches of the family to run it. That hotel was my fathers dream. He and I had so many plans for it. Matter of fact I picked wallpapers for each room and they were imported.

Aliyu went to meet the inheritance committee people that I don’t deserve any inheritance as I am a Christian and not a Muslim like my father. They disagreed with him. I hen it was time to hold meeting with regards how the hotel was going to be operated. Aziz disappeared

Eventually the community decided that due to the disunity the hotel be sold. Aziz and Aliyu fought it and said no. We dragged the matter on for the longest. I hope this was happening They sold all the other properties left including car and pocketing the money

We begged and begged for our share. My mothers sweat. They blatantly refused to give us our share. I cried so many times to God I was livid. I kept telling God I couldn’t handle it and I didn’t want anything and they should just go.

The matter went on and one different meetings held and on Friday the hotel was sold and we eventually got our share. It wasn’t as much as we deserved but it’s enough for school fees. I had given up and I was tired. I had let go. I had no hope whatsoever.

This is a testimony. I kept telling God I can’t fix this one. He kept telling me it wasn’t my duty to but His and all I had to do was believe. I had lost so much hope but God did it. I’m waking up tomorrow to no inheritance problem anymore, the mental break down is over

The emotional and mental trauma has come to an end. Till today I can’t kneel properly on the knee aziz hit me on but it is well. I can’t stop crying. I had so many spiritual attacks. So many. I battled with a lot mehn.

Forgot to add that it was my mums sweat and hard work that enabled my parents to pay for these boys schooling in Atlantic Hall and some of the best schools in the UK”.