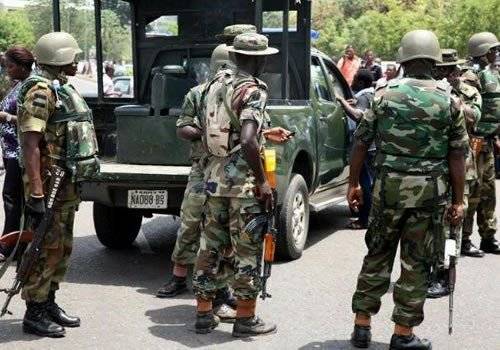 The corpses of four soldiers allegedly killed by members of the pro-Biafra group, IPOB, in Orlu, Imo State have been recovered by the Nigerian Army.

A senior military officer, who confirmed the development to PRNigeria, said the military vehicle damaged during the attack has also been recovered.

PRNigeria reported how Nigerian troops on Monday arrested 20 members of IPOB after they attacked soldiers and civilians in Orlu.

The troops, in a joint operation involving the army, air force and the police, sustained a raid operation in the axis, after the killing of the soldiers.

The IPOB members were said to have ambushed and killed the soldiers who were on the escort of a top military officer.

The officer, a brigadier-general, and his team were on inspection of the civil-military project at Nkwerre.

The IPOB members were said to have also taken away weapons and a vehicle belonging to the troops.

The PRNigeria report was not explicit on when the soldiers were killed. But it appeared the incident happened late January, from a report published, January 26, by the BBC Pidgin English.

The BBC report, which was later pulled down, said the police spokesperson in Imo, Orlando Ikeogwu, confirmed the killing.
Meanwhile, the spokesperson of the Nigerian Army, 82 Division, Aliyu Yusuf, has alerted the public of a fake video on an alleged plan by soldiers to attack women and children in Orlu Market.

Mr Yusuf, a colonel, said the video was circulated on social media to hoodwink the public.

He said: “The video was recorded in an unknown market with a fake soldier claiming to be privy to a supposed order given by 302 Artillery Regiment, Onitsha to start killing everybody at Orlu Market and environs in Orlu Local Government Area in Imo State.

“Preliminary investigation revealed that it was a calculated attempt to maliciously fabricate sensational stories to cause resentment and smear campaign against Nigerian Army Internal Security Operations.

“The supposed individual in the video was not bold enough to reveal his true identity as claimed or present his so called military uniform and identity card which were deliberately obscured to deceive innocent target audience.”
Mr Yusuf added that the Nigerian Army recognises the right of citizens to hold and share opinions on social media, and not to spread divisive contents by unpatriotic individuals.