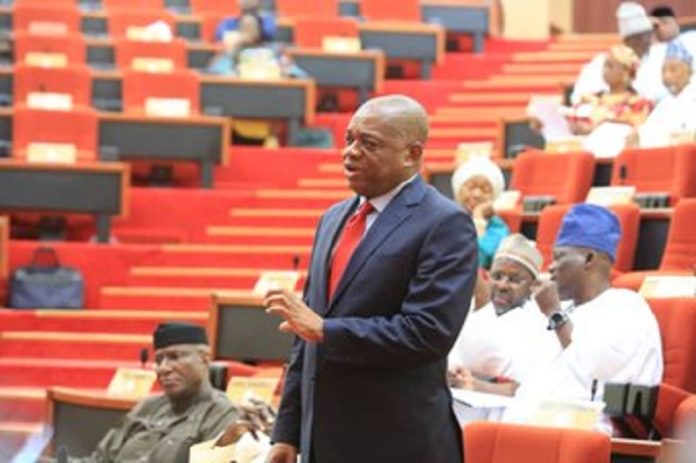 Senate Chief Whip Senator Orji Uzor Kalu has said that the 9th Senate under the leadership of President Ahmed Lawan would ensure that youth friendly bills would be formulated in order to boost youth productivity and prosperity.

Kalu made this known   at a public lecture organised in commemoration of Nigeria’s 59th Independence Day Celebration held at the Abuja National Mosque.

Being  a special guest, He  stressed the need for the country to remain united, despite religious and ethnic differences.

Kalu  noted that the youths must contribute their quota to nation building without depending solely on the government.

“Most of our youths have taken so many things for granted because they expect so much from the government. During my early days as a youth, I became the Chairman of Cooperative and Commerce Bank in Eastern Nigeria at just 27 years old, and I went ahead to become a Governor in 1999.

“Today, majority of the youths in Nigeria expect the government to do virtually everything for them.

“The youths are expected to be vibrant, creative and innovative in order to make way for themselves.

“I encourage our youths to cooperate with our elders. Our elders also owe it as a duty to guide our youths through the right path.”

On the rule of law, Kalu condemned the rate of lawlessness in the country.

He said: “Society, including our youths, also need to imbibe the character of obeying the law, especially court orders.

“The laws must be obeyed no matter the level of the court until the order is vacated. Disrespect of the rule of law is one of the major causes of the problems in our society today.

“Most people in the society, especially the youths, don’t keep to the law, for example driving against the traffic light. Even the wealthy and educated in our society are also guilty of the same offence.

“Personally, I see no difference between Islam and Christianity, because both of them preach peace, oneness, and togetherness. It takes a good Christian to identify a good Muslim and vice-versa.

“The country is towing towards a downward path due on religious intolerance and misunderstanding. Today’s lecture is focused on promoting national unity.

“Parents must do their job of bringing up their children morally upright. The society belongs to us all, but greed is the cause of most of the problems in Nigeria today. Our nation is not poor but people have refused to live according to the goals of the country.

“We in the National Assembly will continue to make bills that will make our nation more united and ensure that our youth become prosperous and productive.

“The youths need to cooperate and contribute their quota towards nation building. They should eschew banditry, kidnapping, militancy and all other sorts of crimes,” Kalu said.