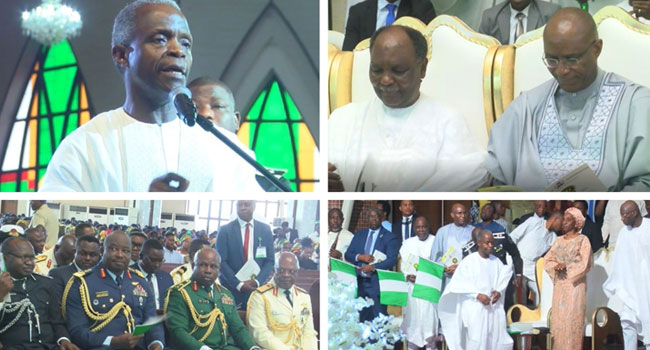 It is less than forty-eight hours to Nigeria’s 59th independence anniversary and an interdenominational service has been held to mark the event in Abuja.

Speaking at the service, Vice President, Professor Yemi Osinbajo says citizens should begin to expect a new Nigeria as God has taken away power and protection from the enemies of the nation.

Professor Osinbajo also gave an assurance that there is hope for the country as the dark days are coming to an end and Nigerians will surmount all the existing challenges.

READ ALSO:  N90bn: Osinbajo Should clean his title, we do not endorse corruption- CAN

Below is the Vice President’s full speech.

“OFFICE OF THE VICE PRESIDENT

NIGERIA’S DAY OF FREEDOM IS AT THE DOOR, SAYS VP OSINBAJO

*Says: the noise we hear are last gasps of our nation’s defeated foe

REMARKS BY HIS EXCELLENCY, PROF. YEMI OSINBAJO, SAN, GCON, VICE PRESIDENT OF THE FEDERAL REPUBLIC OF NIGERIA, AT THE 59TH INDEPENDENCE DAY INTERDENOMINATIONAL CHURCH SERVICE, AT THE NATIONAL CHRISTIAN CENTRE, ON THE 29TH OF SEPTEMBER, 2019

God had promised, through the mouths of His trusted prophets, that He is giving us a New Nigeria! May I announce to you today that God is ready to take us into the Promised Land, the new Nigeria.

And we must remember that God, the Almighty God is the builder of nations, that God controls the destinies of nations and its people. Psalms 24:1 says, “The earth is the Lord’s, and all its fullness. The world and those who dwell therein.”

God promised the children of Israel that He would take them from bondage, suffering and slavery into the Promised Land, a land flowing with milk and honey.

By the hand of Joshua, God brought His promise to pass. They got to the Jordan and as their feet touched the water, the Jordan was separated and they walked on dry land all across the Jordan.

They got to Jericho, a well-fortified city and they did not fire a shot, they brought down the walls of Jericho by a shout. Thereafter, when they were about to take the Promised Land, after Moses had asked that some go and spy out the land, some of those who went to spy said that it would be impossible to take the city, impossible to enter the Promised Land. However, Caleb and Joshua had a different spirit, and they said that because God had promised and because He could do it, all the problems were just bread, mere bread to be eaten by the children of Israel.

God has promised us a new Nigeria, a peaceful Nigeria, a prosperous Nigeria, a Nigeria where justice and equity shall prevail, a united Nigeria, where the different tribes and tongues are not wedges of separation, but the joyful textures of our togetherness. God is ready to fulfill His promise.

We stand outside the new city, the Promised Land, the new Nigeria; like the spies sent by Moses to spy out the Promised Land, some are saying, “Ha! It is impossible, Nigeria cannot change, the ethnic and religious divisions are too deep, corruption cannot end, politicians are too selfish and mischievous.”

Yet, like Caleb and Joshua, we declare that these problems are merely bread for us, we will enter the Promised Land!

The new Nigeria is here, and each and every one of us, our families, our friends, all of us, will eat the pleasant fruits of this land.

God Almighty has taken away the protection of the enemies of this nation. He has taken away their powers, the noise we hear, the turbulence we experience, are the last gasps of a defeated foe. The day of freedom is at the door.

As with Abraham, we in the words of Hebrews 11:10 wait for the new Nigeria, which has foundations, whose builder and maker is God.

As we wait, we declare in the words of Psalms 46:8-11 -“Come, behold the works of the Lord, who has made desolations in the earth. He makes wars cease to the end of the earth; He breaks the bow and cuts the spear in two; He burns the chariot in the fire. Be still and know that I am God! I will be exalted among the nations, I will be exalted in the earth! The Lord of hosts is with us; the God of Jacob is our refuge.”