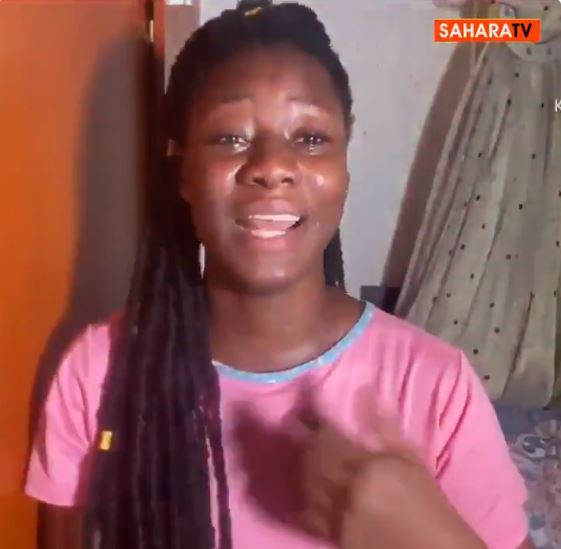 A Nigerian Twitter user identified by the username, @pa_melanin has initiated the hashtag #freeOkeyIfejoku over the detention of her father, Okey Ifejoku and 9 other community leaders of Idumeje Ugboko village in Delta state for years, allegedly on the order of former House of Representatives member, Ned Nwoko.

SaharaReporters gathered that Ifejoku who is the elected President-General of Idumeje Ugboko Development Union was arrested by the Delta State Police Command on the order of Nwoko in 2017.

The former lawmaker had accused him of sponsoring the indigenes of Aniocha North Local Government Area to protest against him and kick against his bid to forcefully acquire additional 90 hectares of land from an area earmarked for all indigenes of the community.

@pa_melanin, in a viral video on her page to help demand freedom for her father, accused Nwoko and the police of malicious destruction of property, disobedience to the order of the court, assault occasioning harm, abuse of public office, unlawful arrest, false imprisonment and conduct likely to cause a breach of peace.

She said, “Sometime in 2017, Ned Nwoko instigated a crisis in Idumuje Ugboko Community in Delta state, as a result of the community’s firm refusal to give him additional 90 hectares of land, having mismanaged the hectares earlier given to him.

“In the ensuing crisis, it was alleged that one Cyprian Kumaorun was killed. While this was ongoing, my father, Okey Ifejoku was several kilometres away in Asaba. He was neither present at the scene of the crisis nor participated in any alleged fight.

“However, since then, Ned Nwoko has made it a point of duty to terrorise the community until they fall on their knees and offer him the land on a platter.

“By virtue of Mr. Okey Ifejoku’s (my father’s) position as the President of the Idumuje Ugboko Development Union, he has borne the greatest oppression from Ned Nwoko. Ned Nwoko has unlawfully used the instruments of state, particularly the Nigeria police in Delta State and Abuja, to oppress the helpless members of Idumuje-Ugboko Community.

“In 2017, Ned Nwoko prompted the police in Delta state to file a charge with the number: A/240C/2017, at the High Court of Delta State, against Ochei Nnamdi and Ofonye Ufoh, for the alleged murder of Cyprian Kumaorun. This charge was held on the merit and the defendants were acquitted.

“Not done, Ned Nwoko, once again, prompted the police to file a charge with the number: MI/24C/2020, at the magistrate’s court of Delta state, Isele-Uku, against his own king (Obi Chukwunonso Nwoko), Mr. Okey Ifejoku (my father) and four other innocent members of the community for the alleged murder of Cyprian Kumaorun. The charge was sent to the DPP (Director of Public Prosecutions) of Delta state, who advised that the defendants had no case to answer. On the basis of the DPP’s legal advise, the charge was struck out.

“While this was going on, Ned Nwoko moved to Abuja and got officers of the FCID Abuja to arrest my father, Mr Okey Ifejoku and 9 other members of the Idumuje Ugboko community. The 10 defendants were arrested, detained at FCID for up to six months, before they were charged to court in two batches, by the office of the Attorney General of the Federation for alleged terrorism and alleged murder of Cyprian Kumaorun.

“One wonders how the Attorney General of the Federation got so interested in a communal dispute in Idumuje Ugboko, with all the actual terrorism and banditry going in the North-East and North-West of Nigeria. Additionally, how could a charge be filed in Abuja when all the ingredients of the alleged offence and all the defendants reside in Delta State?

“The first charge: FHC/CR/169/2020 was before Justice Taiwo Taiwo of the FHC and has been transferred to the FHC , Delta State. The Charge: FH/CR/11/2019 (Mr. Okey Ifejoku and 7 others) was assigned to Justice Abang of the Federal High Court. As at the time of writing this, 7 of the defendants have been granted bail, while the innocent youth Leader, Raymond Omosiete, has remained unjustly incarcerated first at FCID Abuja, and later at Nigerian Correctional Service, Suleja, since November 23, 2020. All on Ned Nwoko’s prompting.

“My father, Mr. Okey Ifejoku spent a cumulative time of about 5 months in both FCID and Nigerian Correctional Centre, Kuje, before he could perfect his very stringest bail conditions. Seeing that almost all the defendants habe been granted bail and that the charge is being exposed for what it is, ‘outright persecution’, Ned Nwoko, once again, prompted officers of the same FCID Abuja, to initiate another round of arrest, for the alleged murder of the same Cyprian Kumaorun, for which Mr. Okey Ifejoku had earlier been discharged by thr Magistrate Court, upon the DPP’s advice, and is in fact, still standing trail at the Federal High Court, Abuja.

“On March 25, 2021, as My father, Mr. Okey Ifejoku and his co defendants exited the FHC Abuja, where they had gone to attend their trial, officers of the FCID Abuja, arrested him and his deputy, Mr. Godwin Akaba, kept them at FCID for almost a week before they were transferred to Delta State Police Command, Asaba, where they are still being detained right now.

“Upon enquiry at the FCID, we were informed that they were arrested for the alleged murder of Cyprian Kumaorun. Few weeks later, an additional member of the community was arrested and the police has vowed to arrest and prosecute the entire community, even though there have concluded several times on the ongoing cases on this issue.

“Currently my father, Mr. Okey Ifejoku, who has been granted bail by the Federal High Court, is in detention at the Delta State Police Command, Asaba, for an offence he did not commit. The police have not charged him to court and they have refused to release him. While all these are ongoing, Ned Nwoko has instigated some members of the community with no trace of royalty to challenge the Obiship of King Chukwunonso. As a result of this, my king is yet to be given a staff of office, more than three years after he assumed the stool of his forefathers.”