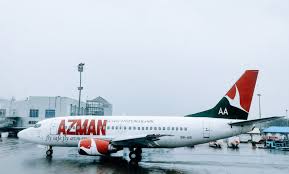 Azman Airline has been indicted by the Nigerian Civil Aviation Authority, NCAA in a new report.

According to the report, the suspended Azman Airline serially overlooked passengers’ safety in their operations.

According to him, over a period of about six weeks, Azman Air Boeing 737 aircraft operating scheduled passenger flights were involved in three separate incidents, resulting in damage to the aircraft in each case but with no loss of life.

“During a routine ramp inspection on 10th February 2021, at Nnamdi Azikiwe International Airport, Abuja, NCAA inspectors found an Azman Air maintenance engineer carrying out replacement of the right-hand main landing gear wheel assembly (nos. 3 and 4) of their Boeing 737-500 aircraft with registration 5N-SYS, without referring to the manufacturer’s maintenance manual.

“This is a violation of the Civil Aviation Regulations, for which both Azman Air and the engineer have been sanctioned but are yet to pay the fine,” Mr Adurogboye added.

“During take-off, a component of the aircraft was observed to have fallen off the aircraft and Air Traffic Control (ATC) notified the Captain, who elected to continue the flight to Lagos.

“Upon arrival Lagos, the Captain failed to make entry in the aircraft technical logbook. Azman Air maintenance team on ground Lagos were notified of the detached part and carried out an inspection, which identified the missing part as the no 3 Main Landing Gear (MLG) heatshield.”

The agency regretted that the airliner’s maintenance team neither made an entry in the technical logbook nor rectified the defect but released the aircraft for a scheduled passenger flight from Lagos to Abuja.

Mr Adurogboye disclosed that when the NCAA inspectors in Abuja were notified, they promptly grounded the aircraft, until the defect was rectified, before releasing the aircraft for resumption of flight operations.

“A Letter of Investigation was issued to Azman Air, and investigations are ongoing. Exactly five days later, on 16th of February 2021, when the previous incident was still under investigation, Azman flight AZM 2325, with the same Boeing 737-500 aircraft with registration 5N-SYS, suffered burst tyres while landing in Lagos, with resultant severe damage to the aircraft engine and fuselage.

“The Accident Investigation Bureau (AIB) is currently investigating this occurrence as a serious incident.”

The NCAA said the Captain reported a loud bang after retracting the landing gear during take-off but decided to proceed to Lagos as all parameters were normal.

“The aircraft landed Lagos and taxied to its parking stand when ATC informed the Captain of the burst tyres as reported by the Airport Fire Service.

“NCAA Kaduna Regional Office Manager alerted the Director General (DG) of tyre debris on the runway in Kaduna when an inspection was carried out after the departure of the Azman flight.

“The DG instructed NCAA Lagos office to conduct a ramp inspection of the Azman aircraft.

“When the NCAA inspectors reached the aircraft, they discovered that two severely damaged tyres had been replaced and further inspections revealed damage to a hydraulic line with resultant hydraulic leak and damage to the hydraulic reservoir.

“The alarming trends of tyre failures, in combination with improper tyre maintenance procedures, are a clear and strong indication of an accident chain formation in its final stages.

“There was an urgent need to break the accident chain before a completely avoidable national tragedy occurs.”

With the aforementioned reckless incidences, the agency, therefore, declared that no responsible Civil Aviation Authority will fold its arms and wait for the next incident to occur, perhaps a fatal accident, before taking action.

Consequently, the Director-General called for an emergency meeting of the Flight Standards Group of the NCAA, to discuss and decide on the next line of action on the worrisome developments at Azman Air.

“After deliberations, which lasted for several hours, and comprehensive evaluations of these incidents, the Director General decided to suspend Parts A3 (Aircraft Authorization) and D43 (Aircraft Listing) of the Operations Specifications (OPS SPECS) issued to Azman Air, thus suspending the operation of the entire Boeing 737 aircraft on its fleet.

“A comprehensive audit of Azman Air will be conducted in the areas of operations, airworthiness, training, licensing, financial health and any other area determined to be necessary during the exercise.

“An Audit Team of inspectors has been constituted to determine the root causes of these incidents, and recommend action plans to forestall re-occurrence,” the statement noted.

According to the statement, during the suspension measure, the NCAA will conduct a comprehensive audit of Azman Air in the areas of operations, airworthiness, training, licensing, financial health and any other area determined to be necessary.

A comprehensive audit of Azman Air will be conducted in the areas of operations, airworthiness, training, licensing, financial health and any other area determined to be necessary during the exercise.

Also, the statement noted that already an Audit Team of inspectors had been constituted to determine the root causes of these incidents, and recommend action plans to forestall re-occurrence.

The agency also debunked the alleged collection of N15million for a publication by the Director General.

The statement said: “Between 20-22 November 2017, Nigeria hosted the ICAO World Aviation Forum (IWAF/3)in Abuja. The sponsorship of this event was sought from aviation organizations, including Azman Air, through a letter from the then Federal Ministry of Transportation (Aviation).

“The Director General, who at that time was the Representative of Nigeria on the Council of the International Civil Aviation Organization (ICAO), and a key member of the organizing committee of IWAF/3, delivered the letter of sponsorship to the management of Azman Air while he was on a family visit to Kano.

“The Chairman and the CEO of Azman Air both promised to revert but never did. The request for sponsorship of IWAF/3 can be independently verified with other Nigerian airlines.

“In addition, a publication, ICAO STATES TODAY, carried an Azman Air advert. The Airline subscribed to the advert in 2016, in preparation for the 39th General Assembly of ICAO but till date, Azman Air has refused to pay the advert cost of US$3,701, despite several reminders.

“The invoice from the publisher of the magazine, FCM Communications based in Montreal, Canada, can be independently confirmed with the publisher.

“The official request for sponsorship of IWAF/3 and reminder of payment for the long overdue invoice of US$3,701 to FCM Communications, are the basis for the false claims against the Director General of allegedly demanding the sum of 15 million naira.”

The statement said: “The Director General assumed office on 24th February 2020 and shortly afterwards, in late March 2020, the Nigerian airspace was closed to all flights.

“Azman Air applied for expatriate quota by a letter signed by the Managing Director on 8th December 2020. That is just over five months ago, and it was promptly turned down.

“The NCAA neither approves nor issues expatriate quota, however the inputs of the Federal Ministry of Aviation and NCAA are part of the approval process of the Nigerian Immigration Services (NIS).

“Azman Air terminated the appointments of 6 Nigerian pilots (3 Captains and 3 Co-Pilots) on 6th November 2020, “due to recent happenings and developments in the company” and a few weeks later, on 8th December 2020, applied for expatriate quota for 6 expatriates to replace the terminated Nigerian pilots. The Director General refused to endorse their request.”

The NCAA, therefore, stressed that it will not succumb to “any blackmail and or threat in carrying out the statutory responsibility of the safety and security oversight, in addition to the economic regulation, of the civil aviation industry in Nigeria, as enshrined in the 2006 Civil Aviation Act”.