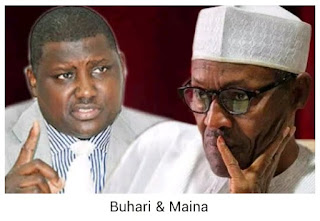 Why Maina has not be sacked
To sack Mains due process must be followed, according to FCSC.

Federal Civil Service Commission is yet to sack a former Chairman of the Presidential Taskforce on Pension Reforms, Abdulrasheed Maina four days after President Muhammadu Buhari ordered for his immediate disengagement.
According to findings by Punch, the process that would lead to his sack was yet to commence.
The newspaper report indicated that as of the close of work on Friday, the Federal Civil Service Commission had yet to commence the process.
The report has it that the process for disengaging a civil servant from the system, as laid down in the rules and regulations of the service, would require strict adherence to civil service rules.
The procedures must be followed in order to avoid its nullification through the judicial process.
A serving director in one of the Federal Government ministries, who would not want to be mentioned for fear, told the newspaper that irrespective of the gravity of the offence, an accused person was entitled to an opportunity to defend himself or herself before further action could be taken.
He further explained that in the event the person refuses to honour the summons, a decision to discipline him in accordance with the rules would apply.
The director stated, “It will require first that a query be issued to the person concerned; he can then be warned as the case may be and then a board/committee will be set up to investigate the matter.
“And in the course of its investigations, the board has powers, according to our rules, to summon the accused person to defend himself.
“It is after this procedure is carefully followed that further action can be taken.”
On the Presidential order, he said, “Yes, the President has spoken. My understanding of what he said is that the civil service commission, which has the statutory duty of hiring and firing, should commence the procedure of ensuring that this happens.
“Mr. President that I know is a man that follows procedure; that is why some of his actions are being misinterpreted to mean he is slow.”