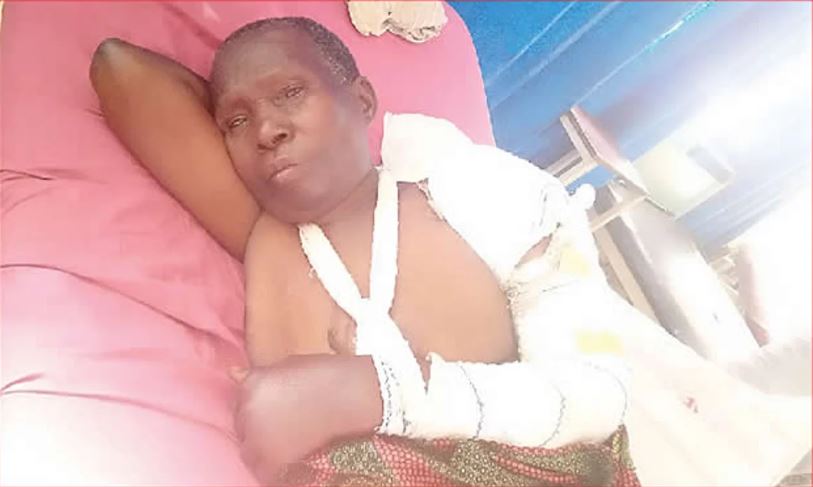 Eighty-year-old Southern Kaduna woman, Martina Sarki, was allegedly shot by Fulani herdsmen when invaders stormed her home at Gonan-Rogo during an attack that claimed the life of her daughter-in-law, who left a five-year-old child behind. She tells GODWIN ISENYO on her hospital bed that all she could say was ‘Jesus Christ’

How old are you?

I’m Martina Sarki and I am 80 years old.

How did you sustain your injuries?

We were fast asleep when gunmen invaded our home. All I could hear were gunshots all over the place…boom, boom, boom. I saw my daughter-in-law on the floor in a pool of blood. She was shot and her lifeless body was on the floor. She had just been delivered of a baby; the baby was less than a week old. The baby was just five days old. Before then, I told my daughter-in-law that Fulani herdsmen had invaded our village. She woke up but by then, it was a bit late. Meanwhile, my son, who was in his room, on hearing gunshots from afar, exclaimed that ‘Fulani herdsmen have invaded our village and they are going to kill us like dogs today’.

He dashed out to inform our neighbours and perhaps mobilise people but there was confusion all over the place. I rushed back and heard my daughter-in-law screaming and shouting. She was shouting, ‘Mama o! Mama o!’ I was just repeating, ‘In the name of Jesus.’ I could hear gunshots…boom, boom, boom! And I fell down. My daughter-in-law fell down beside her five-day-old baby. I called on the Fulani herdsmen to come back and kill me instead of my daughter-in-law. The Fulani people were just asking, ‘where is the gun, where is the gun’ when they came into our house.

When did your son return?

After the attackers left, my son came back to recover the remains of her wife. I was also in a pool of blood. When the husband returned and saw all of us lying down, all that he said was, ‘They have killed my wife.’ He had earlier gone to inform neighbours about the invasion, not knowing that they had all escaped into the bush.

How many relations did you lose in the attack?

In my presence, they killed my daughter-in-law, who had just been delivered of a baby. The baby is still alive but the mother was shot dead.

How are you so sure that the attackers were Fulani?

What kind of person was your daughter-in-law?

She was a kind-hearted woman. She would boil water for me so I could have my bath. I would certainly miss her meals because she was a good cook. She was a neat woman who kept her surroundings clean all the time. I will miss her good character, food and the peaceful way we lived together over the years. She was a farmer.

How scared are you to return home?

If everybody decides to go back and the place is peaceful, why not? I will go back once I am okay. I pray that there will be no attack like that again.

How have people in the area been protecting themselves?

How many children did your daughter-in-law leave behind?

She left behind her five-day-old baby. I think she should be two weeks old now.  They were newlyweds. They had not even been married for a year before the attack claimed her life.