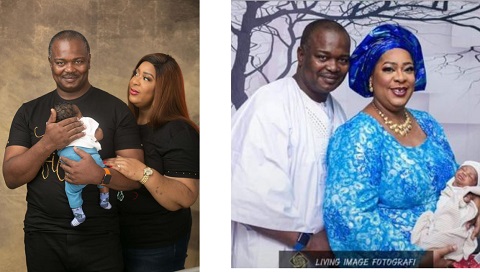 Ladunni Idowu Giwa-Osagie and husband with their child A woman has been left eternally grateful after her dreams of a happy married life came true. The Nigerian woman, Ladunni Idowu Giwa-Osagie's inspiring story was shared by a friend after she welcomed her first child at almost the age of 50. Ladun met her husband, Aigbovo-Giwa-Osagie when she turned 47, they got married at 48, she became pregnant at 49 and on June 25th, 2021, just before her 50th birthday, she gave birth to a baby boy named Osarumuwese Oluwaseyitanfunmi Nosakhare. Her heartwarming testimony and inspiring personal story was shared by a friend, Ifeanyi Omeni on Monday, June 28. Read below: GOLDEN GLADIATOR
I loved gladiator films during my growing-up years. Films like Ben Hur and its counterparts, featuring warriors of the ancient Roman Empire who fought in amphitheatres, to entertain an excited crowd, were my great delight. A little bit of that love still lingers, and I sure can settle down to watch those films at a stretch, without boredom descending on me.
Those Roman gladiators were like tin gods, ruling the amphitheatres and looked like the epitome of masculinity. Many maidens will sure feel safe, encased in those strong arms, characterised by rippling muscles. And my God, were those guys handsome? Soft on the eyes, with smiles that could charm maidens of that era. Looks like they were handpicked.
I took a trip to Rome last year and saw the Colosseum, an amphitheatre where gladiator fights took place in days of old. The monumental Roman Amphitheatre in Rome, is a golden-brownish building with perforated holes. I half-hoped to see Ben Hur arise from the arena and show his skills as a daring gladiator. The gladiators of old were conquerors, warriors and celebrated champions. Though the Oxford Advanced Learners Dictionary describes a gladiator as a man in ancient Rome, who was trained to fight other men or animals, in order to entertain the public, I beg to differ from that definition, in this creative message.
I dare to define a gladiator as a male or female who has fought and won a long-drawn out war. One who can say with confidence that some may trust in chariots and horses but I will remember the name of the Lord, for his name is a strong tower and safe within those fortified walls, I have won a war and can now share the story of my gladiator fight.
This is a narrative of a female gladiator who fought and emerged victorious and whose story is told to encourage those still facing failure, that they will become gladiators, too.
Her story for me, begins many years ago…I walked into Protea Hotel that day and saw this charming lady with two prominent features. A glittering golden skin and a gap tooth that added to her charm and poise. From a distance, I admired her, and was soon brought in close contact with her.

The WhatsApp group was formed for singles-still-waiting-still desirous to use the way of righteousness to achieve success. I was one of them and she came on board too. With rapt attention, I viewed her contributions to the group and was eager to meet her.
The day came, at Dominoes Pizza outlet. Her sweet presence filled the place and I listened with rapt attention to her tales of her walk in the walkways of singlehood. Daring, and open, she shared her story and I was fascinated. Another meeting was at a member’s house and she once again showed she is a sweetheart.
Many more virtual meetings followed, as I heard her voice through the thought-provoking comments she made on the WhatsApp group. She has shown she is a Tale Weaver convert, on the group. Anytime I post an article and only one person reads it, it is sure to be her. Her comments come in torrents, encouraging and heartwarming.
This gap-tooth queen, is one great encourager of my creativity. She bought my recent novels and gave me my very first job of tribute writing. I crafted a birthday tribute for a friend of hers and her appreciative comments made my day and encouraged me to take up the art form as a business venture. I refused financial compensation, but she insisted and rewarded me.
Was I thrilled that day in the year 2019, when she sent the message to the WhatsApp group.
‘I, Oladunni Idowu, finally found love at 47. Join me in appreciating God for his faithfulness and mercy. Indeed, delay is not denial.’
Her words of encouragement and inspiration brought to life dead dreams and shrivelled hopes. The members of the Mature Christian Singles celebrated one of their own, Ladunni, whose story of triumph made many believe in the message of an on-time God.
Ladunni’s story follows a trail of triumph. Of a lady who found love at 47, married at 48, got pregnant at age 49 and just before her 50th birthday, gave birth to a baby boy called Osarumuwese – The Lord has done me well; Oluwaseyitanfunmi – the Lord has done this for me in full and Nosakhare – God's Will.
On 25th June 2021, Ladunni took a rapid leap unto the 5th floor as the mother of a baby boy.
I present the GOLDEN GLADIATOR, LADUNNI GIWA-OSAGIE, whose story has proved the biblical saying that weeping may last for a night, but joy comes in the morning.
Ladunni’s marriage to Aigbovo Giwa-Osagie, whom I call the husband of the year, is an encouragement to those Christian sisters who are beckoning at compromise, because they feel that God has forgotten them and they want to 'help' themselves.
The Gap-tooth Queen has changed address and has made many ladies dress their lives with hope.
I attended the GOLDEN CEREMONY OF LADUNNI’S ASCENSION to the fifth floor and the dedication of her son at White Stone Event Centre, Billingsway Ikeja, Lagos, on 25th June 2021, where the guests were bedecked in white, as a symbol of the purity of divine love and the freshness of a new season.
I watched Ladunni, who appeared at first in white lace with gold trimmings, and later as the lady in red, symbolizing the love she so freely shares with her husband. It was palpable as a touch, and people could not hold back their demonstrations of joy for the woman they came to honour.
Her husband dripped with joy and gratitude to God who gave him a woman he described as beyond amazing. When he stated that since he met her, he stopped having headaches, I could testify, for Ladunni is a woman who sprays her sweet fragrance wherever she steps into.
Her calls and words of encouragement to me, when she shared the testimony of her meeting with her beau, I cannot fail to recall. When she noticed my silence on the group, the absence of my usual birthday tributes for members, she alone checked on me and sent a voice note, praying for me, to uplift my spirits.
Beloved Ladunni, such an inspiring lady!
I watched the glow on her face on that day of her coronation as a gladiator and could see that it went beyond the signature of a skilful makeup artist. It was a glow from within. As though a pipe connected her innermost feelings of joy, to her outer expression of delight.
Beyond the music of Yinka Alaseyori of oniduromi fame, the presence of comedian Kenny Black and Sonma Anyama, Dave of My Siblings and I comedy by Funke Akindele, there was the atmosphere of undiluted joy, a crowning of a maiden’s desire.
To Ladunni Giwa-Osagie, the Golden Gladiator, I dedicate this message. To the Golden Gladiator, who has not performed to entertain, but whose testimony has paved a way for many ladies to anchor their trust in God, I present this tribute. Remain rooted in divinity.
I pray… For those who are younger than Ladunni, that they will not soil their garments of righteousness, while they wait.
For those older than Ladunni, that they will still look ahead and see a brilliant sunrise, where they will surely wear the garments of a gladiators. 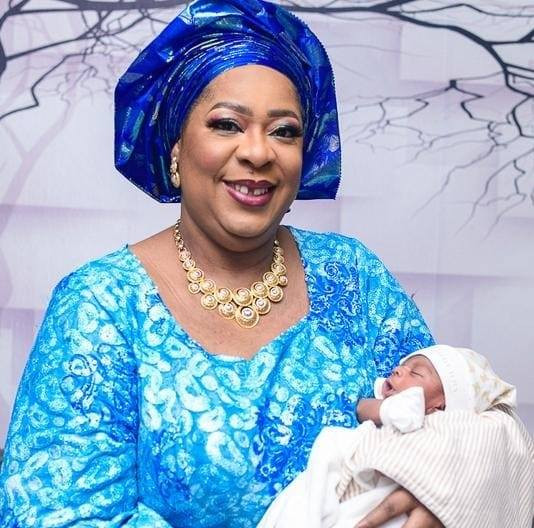 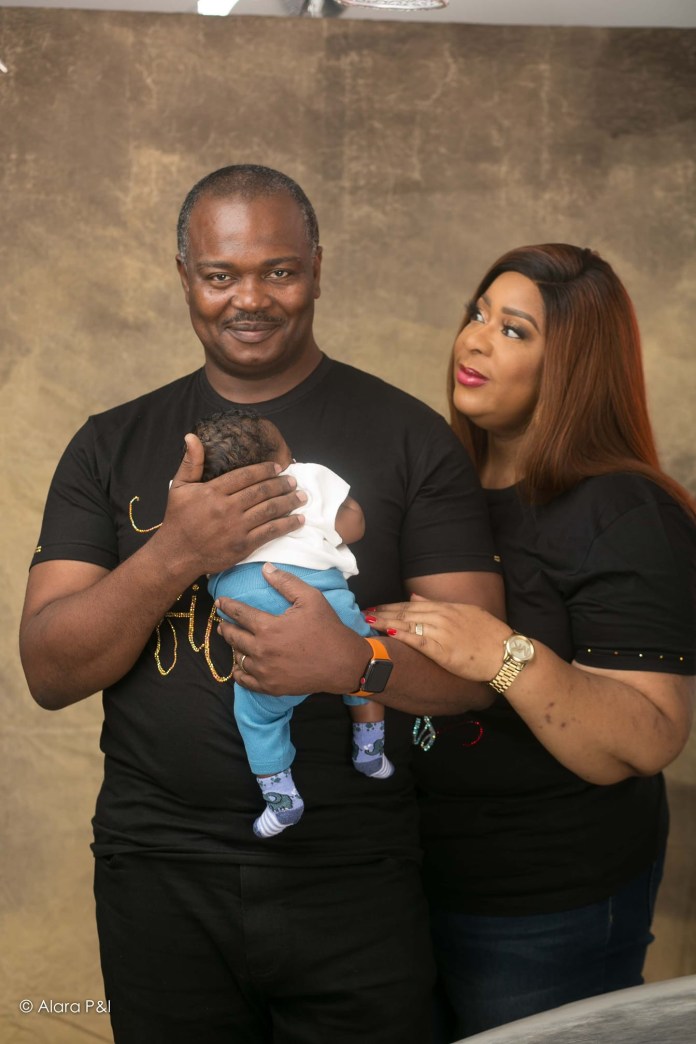 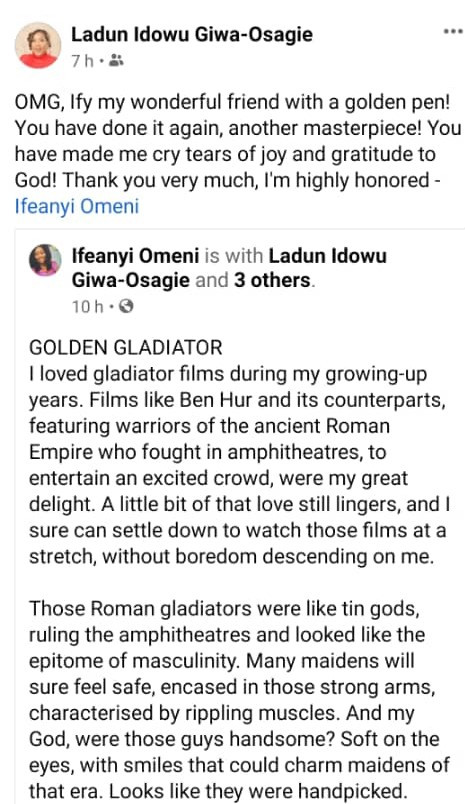 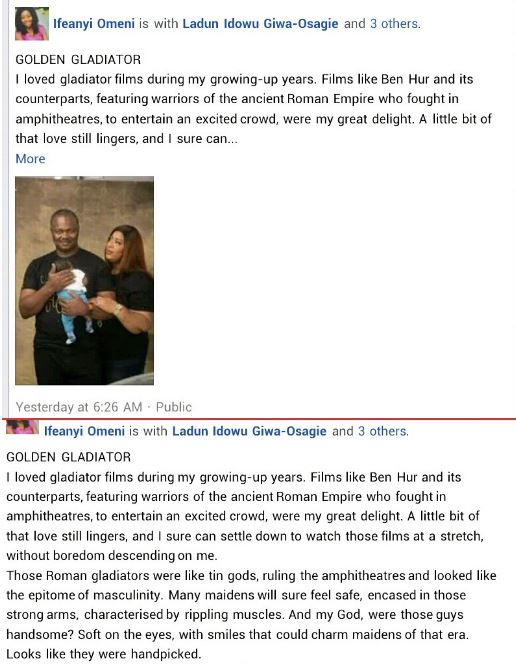