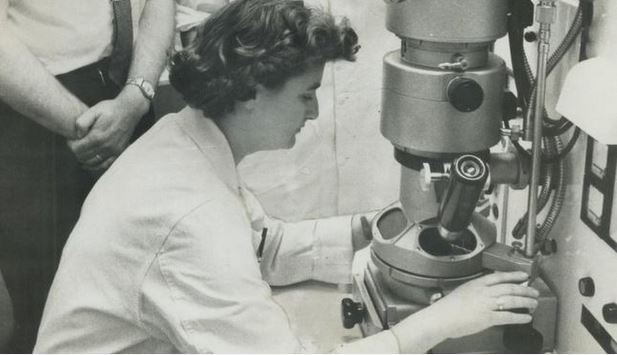 As of the time when the novel coronavirus first broke out in China in December 2019, global leaders and health experts didn’t mince words referring to it as a “strange pneumonia-like disease” given that relatively little was known about it for diagnosis.

The ailment, which has now spread across more than 210 countries, leaving over 2 million people infected and 140,000 dead, would later be named COVID-19 by the World Health Organisation (WHO) after it had warned that the disease represented a “very grave threat” to the human race.

Yet, as the quest towards discovering a vaccine continues amid series of ongoing research towards unraveling the behavioural patterns of the virus, there are those whose works in the field virology aided the successes that have been recorded so far.

One of such persons is June Almeida, a Scottish virologist and pioneer of virus imaging, who discovered the first human coronavirus in a body research that has become a reference point for experts in understudying SARS-CoV-2, the virus that is causing COVID-19.

Coronaviruses are a group of viruses known to affect mammals and birds but cause respiratory problems in humans. Although COVID-19 is a new illness,  it is said to have been caused by the type of coronavirus that Almeida identified in 1964 at her lab in St Thomas’s Hospital, London.

Almeida was born June Hart in 1930 and grew up in a tenement near Alexandra Park, northeast of Glasgow. She was said to have left school with little formal education, yet, gained employment as a laboratory technician in histopathology at the Glasgow Royal Infirmary before moving to London.

In 1954, she married Enrique Almeida, a Venezuelan artist with whom she had a daughter. They moved to Canada where she worked temporarily at the Ontario Cancer Institute as an electron microscopist. Even with few formal qualifications, Almeida still earned herself a promotion.

Almeida’s legacy, coronavirus, and the grand achievement in virology

Almeida developed outstanding skills with an electron microscope and this saw her pioneer a method that better visualised viruses by using antibodies to aggregate them. It was only a matter of time before several publications started crediting her for her work on identifying viral structure.

After returning to London, Almeida was said to have produced the first images of the rubella virus using immune-electron microscopy and also worked on characterizing a virus family including the severe acute respiratory syndrome (SARS) virus and the SARS-CoV2 that causes COVID-19.

BBC reports that, due to the recognition of her achievements in the UK, Almeida was lured back in 1964 to work at St Thomas’s Hospital Medical School in London, the same one that treated Prime Minister Boris Johnson when he came down with the current COVID-19 disease.

On her return, she was said to have collaborated with David Tyrrell, a doctor who was running research at the common cold unit in Salisbury in Wiltshire. Studying unusual virus samples similar to those of influenza, Almeida later identified what became known as the first human coronavirus.

She would later receive a doctorate degree at the Postgraduate Medical School in London while finishing her career at the Wellcome Institute for the History of Medicine, where she was named on several patents in the field of imaging viruses. Her techniques were adopted in the US and UK.

Yoga instructor and eventual death from a heart attack

Almeida left Wellcome and began to teach yoga, although she temporarily had to return in an advisory role in the late 1980s to helped take novel pictures of the HIV virus after publishing a manual for rapid laboratory viral diagnosis in 1979 with the World Health Organisation (WHO).

Following publications that helped uncover the virus, Almeida died in 2007 at the age of 77 after suffering a heart attack. But her legacy has lived on in the hearts of medical experts who quickly leveraged on her work to identify what was earlier deemed a mysterious disease in Wuhan, China.