Modríc comes out amidst clapping, to make room for Ceballos, and “Como no te voy a querer” begins to sound in the stands. Five minutes are added.

In the 83rd minute Courtois saves again for Real Madrid, with another Salah shot. 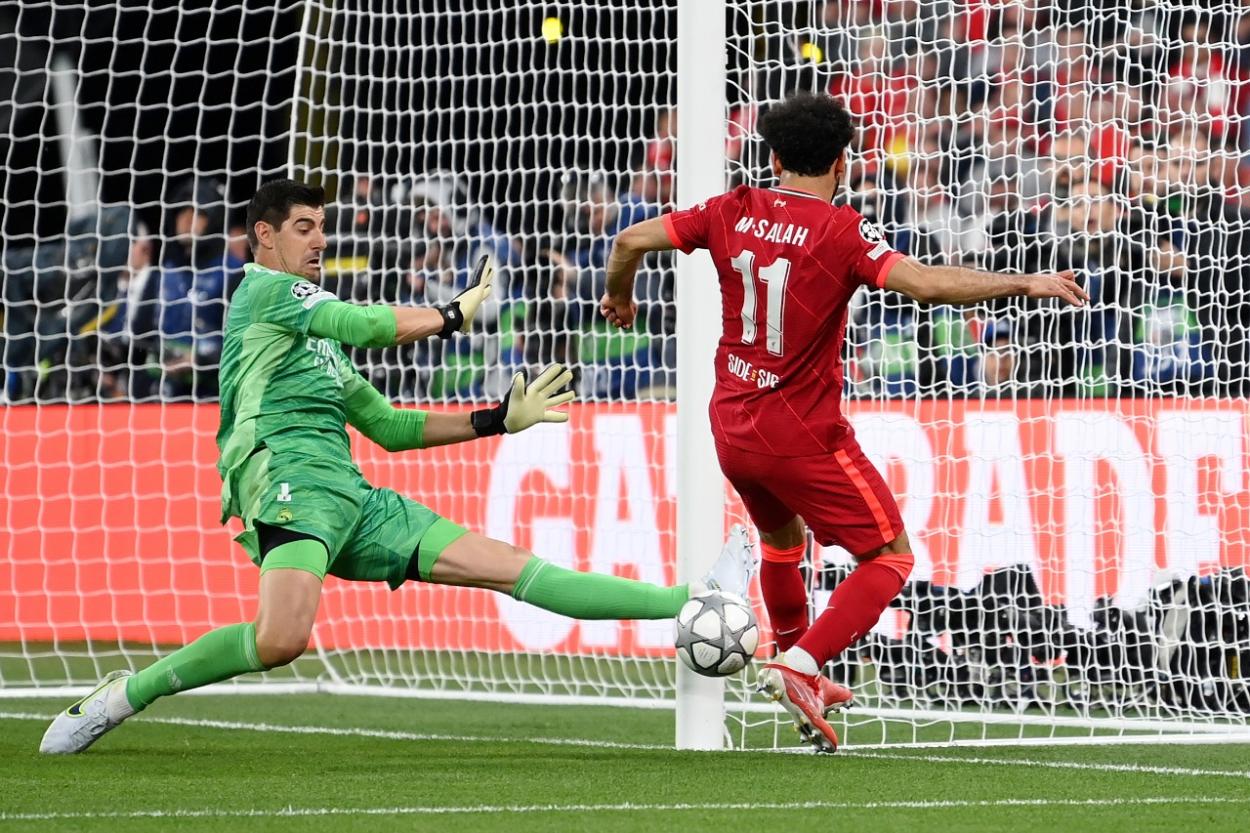 Liverpool had an option for an equalizer, but Keita misses, his shot was a three-footed shot that goes wide.

He puts on the hero’s cape!
Salah sends a shot from outside the box, which again Courtois saves the goal, preventing the equalizer.

Goal!
The first of the night arrives, from Brazilian winger Vinícius, after a cross from Valverde. Real Madrid takes the lead on the scoreboard.

What a start, nothing for anyone, arrivals on both sides, substitutes warming up for possible substitutions.

The second half gets underway, with Real Madrid taking more of the lead.

Liverpool had a strong attacking presence, bringing several players close to Courtois’ goal, but the VAR had already arrived and disallowed the French striker’s goal, which could have been the game’s first.

Before halftime, the VAR disallows Benzema’s goal, after a mistake by the Liverpool defense.

Almost there!
Madrid with Benzema had the first goal, but the referee disallows the Frenchman’s goal.

Mane found a corner kick, after his shot was blocked by Miltão and the shot was met by Henderson, but his shot from outside the box was wide.

With that Benzema-Vincius combination, Real Madrid got back into the game. After provoking a corner kick that resulted in a Liverpool counter-attack, the Brazilian got into the six-yard box and won a free kick after Carvajal fouled Diaz.

Vini’s cross, looking for Benzema, but that ball is no problem for Alisson.

What a save!Once again Courtois saves Real Madrid, after that shot from Mane, which hits the post and manages to touch it to deflect the ball away. 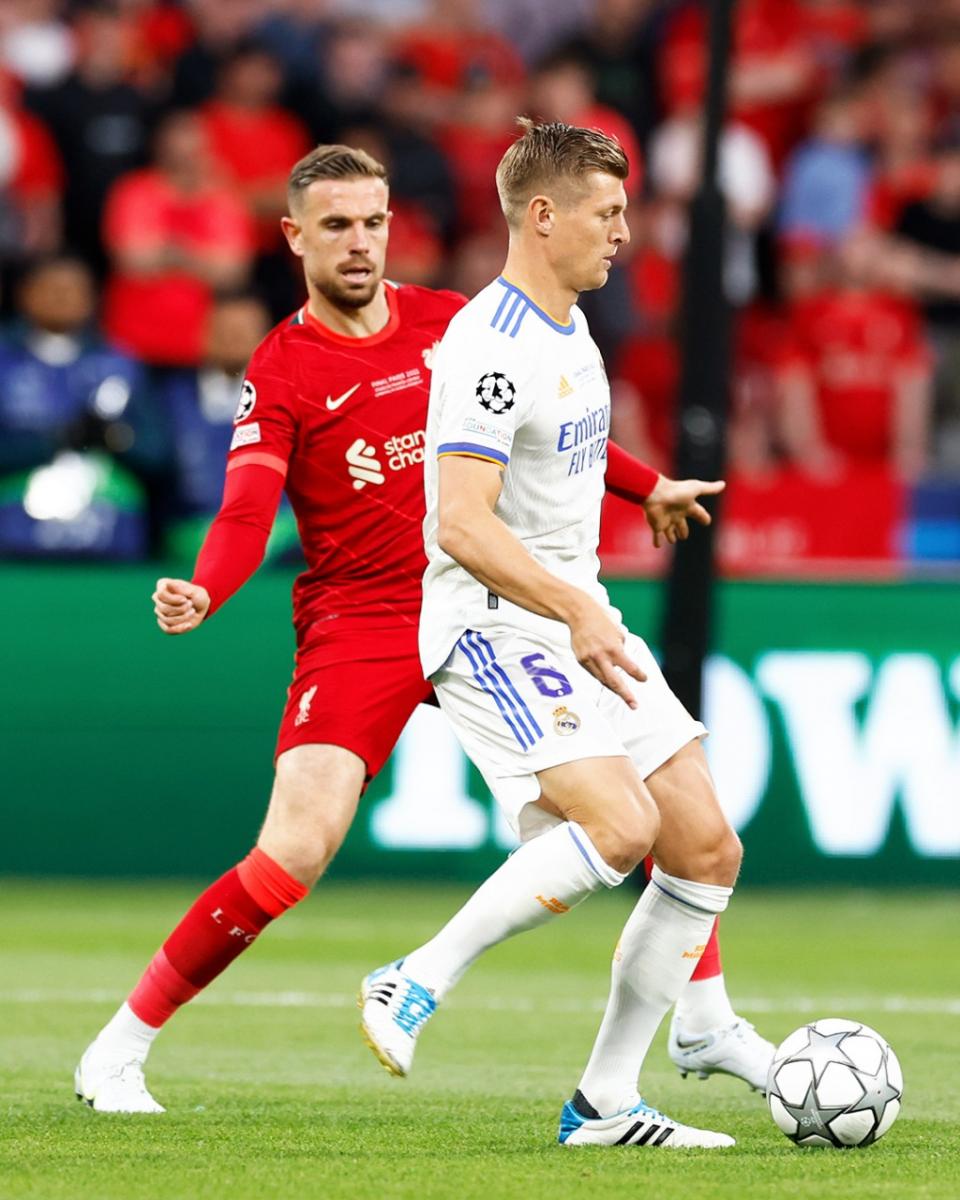 The first ten minutes of the match were back and forth. Different attacking proposals from both teams, but no danger for the goalkeepers.

Foul for Liverpool, free kick the ball, which is deflected by the Real Madrid defense.

The ball is rolling at the Stade de France

Due to the problem with fans attempting to enter the stadium without a ticket has not been resolved, the start time has been pushed back another 30 minutes.
To avoid slowing down the game, the players return to the field to warm up.

There will be a delay in the start of the game, as announced on the stadium screens, due to late arrival of fans and the closure of accesses after several fans entered without tickets. In 15 minutes, the game is set to begin.

41 years after their first meeting in the beautiful city of Paris, Liverpool and Real Madrid will meet on Saturday May 28,  in Saint-Denis, north of the French capital, for the 2021-22 Champions League final.

This weekend, the Reds are aiming for a seventh title in Europe’s top competition, while continental veterans Los Blancos are attempting to win the trophy for a record-extending 14th time.

Liverpool vs Real Madrid, en route to the final

All of Real Madrid’s goals en route to the final.

Real Madrid and Liverpool have met eight times in European competition, with Los Blancos winning four times to the Reds’ three, and the most recent meeting ending in a draw.

After a 5-0 aggregate victory in the 2008-09 last-16, Alan Kennedy’s winner propelled Liverpool to the European Cup final against Real Madrid in 1981, kicking off a run of three consecutive wins for the Merseyside club.

Liverpool vs Real Madrid is a difficult game to predict. Keeping the likes of Benzema, Vinicius, Salah, and Mane at bay for 90 or 120 minutes is nearly impossible, and the Reds’ attackers, in particular, should be confident of scoring a few goals against a shaky Blancos defense.

Real’s risky defensive strategy will always leave them vulnerable to the pace and trickery of Ancelotti’s two Brazilian starboys, and Benzema only needs one half-chance to restore parity for Real.

We believe that Liverpool’s recent experience from 12 yards will help them get their hands on Europe’s biggest prize for the seventh time and end the Real fairytale. Having Thiago and Fabinho fit to start the game would be a massive boost for Klopp, whose side may be taken all the way to spot kicks again.

Our expert tipster partners at Sporita.com are predicting over 2.5 goals in

Meanwhile, the manager of La Liga Champions, Real Madrid, Carlo Ancelotti has released his full squad list to play against Liverpool in the final of the UEFA Champions League on Saturday.

Real Madrid will play against the English Premier League side, Liverpool in Paris.

Recall that Real Madrid defeated Manchester City in the semi-final stage, while Jurgen Klopp’s side defeated Villarreal to qualify for the final

The kick-off time for Liverpool vs Real Madrid is 8 pm.

The Champions League final will be played at the Stade de France.

Below is Real Madrid’s squad against Liverpool: