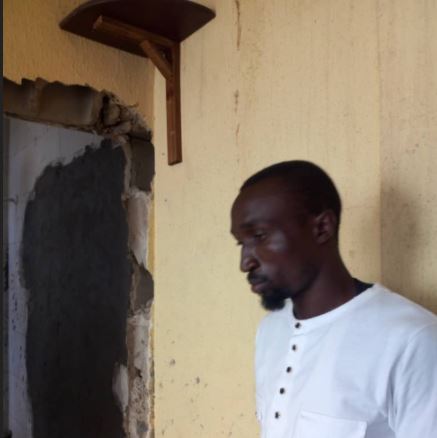 There has been reports stating that the Lagos State Police command are allegedly under intense pressure to release a traditional ruler and his son, who were arrested back in July in Satellite Town, Lagos.

Yusufu Olarinde, aka Prince, is the son of  Alhaji Latifu Sadiku, the self-acclaimed traditional ruler of Oguntedo community in Satellite town, Lagos.

Yusuf was arrested in July at Abule Oshun after he allegedly led his gang to a warehouse to rob and extort the owners early on Saturday, July 18. During the operation, the attempt was resisted by locals, leading to a fierce crisis. The gang allegedly wounded scores of people and destroyed properties in the process. Unconfirmed report claims that two persons were feared killed during the crisis and their bodies were taken away to an unknown place.

The suspects were arrested after residents of the area complained to the police concerning the crimes allegedly committed by Olarinde and his crew.

After hearing the complains, the Lagos State Commissioner of Police, Hakeem Odumosu, ordered the Divisional Police Officer, Satellite Division, Chike Oti, to track down and arrest the suspects. The police also revealed that the prime suspect, Olarinde had been on their wanted list for alleged murder and violence in his community.

According to Crime World, after Yusufu Olarinde’s arrest, he had boasted that he had connections and he would use his connections in the Police Force and Lagos State Government to ensure that CSP Chike Oti, who led the team that arrested him, was redeployed from Satellite Division to the Northern part of the country.

Yusuf’s cohorts reportedly put a call through to his father who had gone into hiding at the neighbouring Benin Republic to evade a Bench Warrant and his father, who is allegedly responsible for a number of atrocities in Satellite town, Abule-Ado, Finiger and Mile 2, reportedly snuck into the country and called his connection in the police force – a retired Commissioner of Police who doubles as a lawyer.

Crime World adds that the retired Commissioner of Police advised the self-acclaimed traditional ruler to get his lawyer to do a counter-petition to the AIG zone 2.

Since he had the support of the retired Commissioner of Police and also the support of one Tunde Faduola  (aka TOFEM), an alleged land grabber who is said to be connected to the bigwigs in Lagos State Government, Alhaji Latifu Sadiku, confidently visited the office of AIG Illyasu to secure the release of his son but the AIG ordered his immediate arrest and detention. He was later whisked to the SARS facility Ikeja, where his son was also being held.

However, since the arrest of father and son for a series of horrific crimes, including for multiple murder and sundry crimes in the community and environs, the police have allegedly been pressured by highly placed people in the society to release the traditional ruler and his son.

According to the online publication, multiple police sources have revealed that the retired Commissioner of Police who doubles as a lawyer and who is still relevant in Police affairs, had relentlessly made frantic efforts through telephone calls with CP Odumosu and the AIG Zone 2, Ahmed Illyasu, including sending a lawyer from his chamber to the two senior officers to ensure that the allegations against the detained notorious killers were dropped and they were set free.

However, the duo of CP Odumosu and AIG Illyasu had flatly turned down the request on the ground that the allegations against father and son were weighty; bothering on multiple murder, wanton destruction of properties, extortion and civil disobedience and therefore, needed to be thoroughly investigated and if found culpable, be prosecuted.

“Honestly if you know what is going on since this man and his pikin were brought here, our CP and AIG have been under pressure to release them. A certain retired CP who is presently serving in one of the Commissions in Abuja and another retired senior woman Police officer simply called Aunty-Ayo have been doing everything to ensure that they release the man and his son and drop every allegation against them.

“We hear that the royal father gave them acres of lands that he grabbed from people in his community. But it seems our Ogas are not yielding because of their (the suspects’) atrocities and that is why they are still with us,” Crime World quoted a police source.

Revealed! Hushpuppi And His Gang Were Planning A $435m Cyber Heist Before They Were Busted