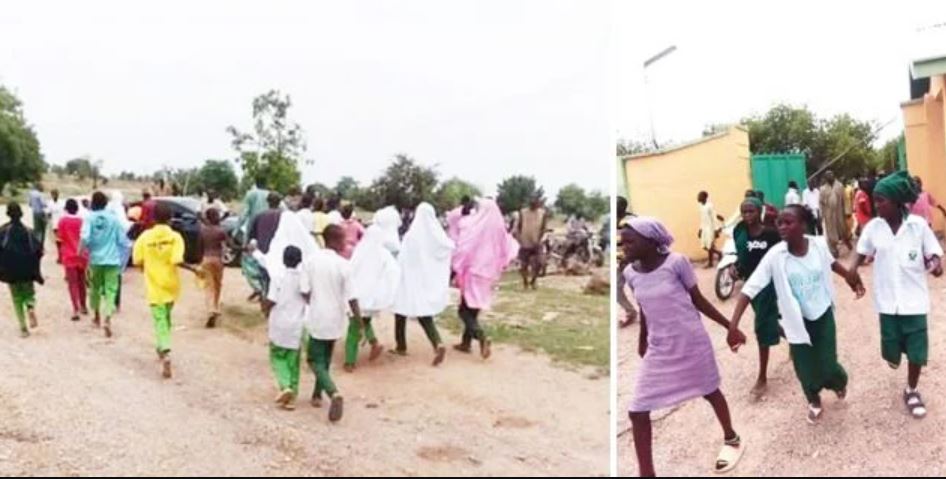 Some students after the attack. Photos: Adeniyi Olugbemi

ALSO READ : Pregnant Woman Cries Out , I Don’t Have N1.5million To Give Police, My Husband Is Not IPOB Member, Release Him

A source told our correspondent that the majority of the kidnapped students are SS1 and SS2 pupils who were in the middle of taking their end-of-term test.

Three students, one each from Kamba, Kebbi; Wushishi and Anaba in Niger State have been confirmed dead, while nine, including eight students and a teacher, have been rescued.

Governor Atiku Bagudu, who visited the school on Friday to commiserate with the staff and students on behalf of the President, Major General Muhammadu Buhari (retd), said he had received intelligence about bandits’ activity weeks in advance.

He stated, “About two weeks ago, there was news of bandits’ movement and they were sighted around this area. We consulted with the federal authorities here, who told us that the school had about two weeks to finish its term examinations.

“It was agreed that if security could be reinforced and stationed in the school, it was better to support the children to finish their examinations before going home. This abduction was a brazen and tragic incident where bandits confronted the policemen who were providing security to the school.

“Unfortunately, they made away with some students and teachers. Since this unfortunate incident occurred, all hands have been on the deck to ensure that these children and staff of ours are rescued alive, hale and hearty.”

Bagudu also expressed delight that the Commissioner of Police had deployed a 22-man team of the Special Anti-Terrorism Task Force to the school.

He said, “The security agents were around even during the attack. They deserve commendation for their gallant efforts, while trying to repel the attack. Unfortunately, they were overpowered because the bad elements came in their hundreds.”