On Monday, a Federal High Court in Abuja ordered the federal government to pay N5 million to Maxwell Opara, one of the lawyers for Nnamdi Kanu, the outlawed leader of the Indigenous People of Biafra (IPOB), for violating his rights.

Opara had sued the Department of State Services (DSS) for damages in September 2021, according to the report.

When Opara visited Kanu last week, he claimed the DSS had violated his fundamental human right to dignity.

He requested that the court order the DSS and its Director-General to issue a written apology that would be published in two national daily newspapers. Now he has won in court, as Justice Zainab Abubakar, the judge, has ruled in his favour. 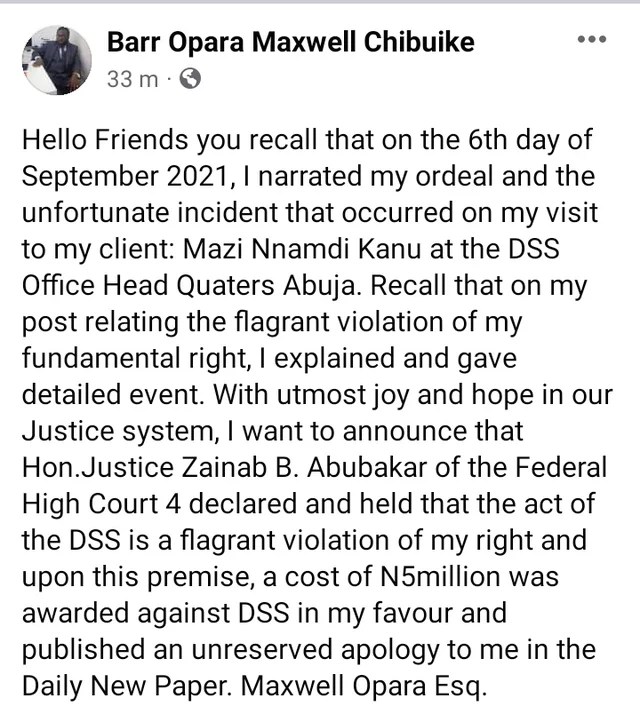 Opara announced on his known Facebook page. “Hello, Friends you recall that on the 6th day of September 2021, I narrated my ordeal and the unfortunate incident that occurred during my visit to my client: Mazi Nnamdi Kanu at the DSS Office Head Quarters Abuja. Recall that in my post relating the flagrant violation of my fundamental right, I explained and gave a detailed event.

With utmost joy and hope in our justice system, I want to announce that Hon. Justice Zainab B. Abubakar of the Federal High Court 4 declared and held that the act of the DSS is a flagrant violation of my right and upon this premise, a cost of an N5million was awarded against DSS in my favour and published an unreserved apology to me in the Daily Newspaper,”