Iyabo Ojo, a Nigerian actress, has taken a swipe at her colleague Funke Akindele for allegedly paying a review platform to disparage a new Toyin Abraham film.

Abraham recently released her long-awaited film, ‘The Ghost and the Tout Too,’ which stars several movie stars, including Mercy Johnson.

However, on Friday, CinemaPointer, a website dedicated to film reviews, ranked Akindele’s ‘Omo Ghetto: The Saga’ above Abraham’s new film.

The platform had referred to Abraham’s film as “a haplessly brain-dead storey,” while also alleging that the actor attempted to replicate Akindele’s concept in the sequel to “Omo Ghetto.”

“It is not recommended for intelligent individuals. We have told you numerous truths over the years, but none greater than this: Intelligent minds were never considered in the writing or production of ‘Ghost and The Tout Too.’ As a result, intelligent minds will find it completely unappealing,” it wrote in its review of Abraham’s film.

“Regardless of how blatantly it plagiarizes’mó Ghetto: The Saga’ in an attempt to emulate its brilliance. Unlike that one, ‘The Ghost and The Tout Too’ does not understand that filmmaking is rooted in brainwork, not in using cinema to do ‘Yahoo,’ exploiting celebrity to fleece fandoms.

“As a haphazardly brain-dead storey leads to the pointless scene after pointless scene, all of which are soaked in a deluge of sterile dialogue. So much so that attempting to find any mirth while viewing it would be fruitless.

“Believe us, if you’re intelligent, you’re better off staying in this weekend and watching’mó Ghetto: The Saga,’ which, coincidentally, premieres on Netflix on Friday, September 10th, 2021. If not, your brain will go into the pain and you will tyre.”

Ojo responded in the post’s comment section, accusing Akindele of sponsoring the review.

Additionally, the actress chastised the platform for its review of Abraham’s film, claiming that the platform’s alleged attempts to discredit her colleague’s work will fail.

“How much did Funke pay you to write this nonsense? The day she stops talking bad about her coworkers or attempting to discredit their hard work or personality, that is the day she will experience inner peace,” she wrote.

“Na social media, you’re going to develop into a better person. I know you and you know me; we are well acquainted and [email protected], please return and inform your sender that no matter how many times you attempt to discredit Toyin or her works, it will fail.

“Toyin’s efforts and the film ‘Ghost and The Tout Too’ will succeed at the box office, and your blood will run cold with hatred and jealousy…

I made my position known, messager of doom.” 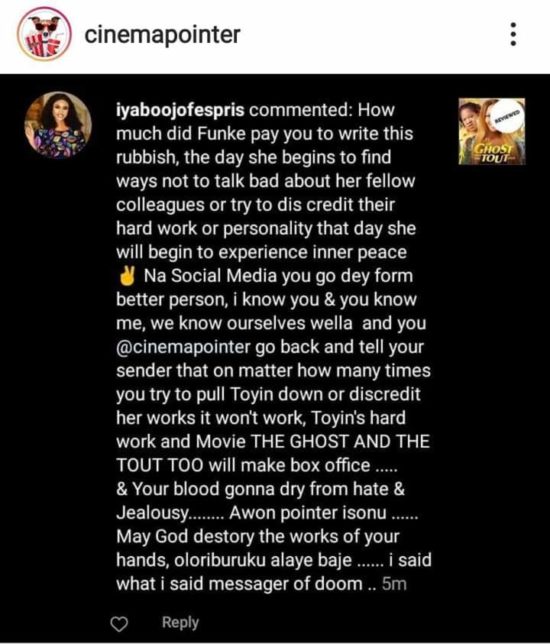 As of the time of this report, Akindele and Abraham had not responded.