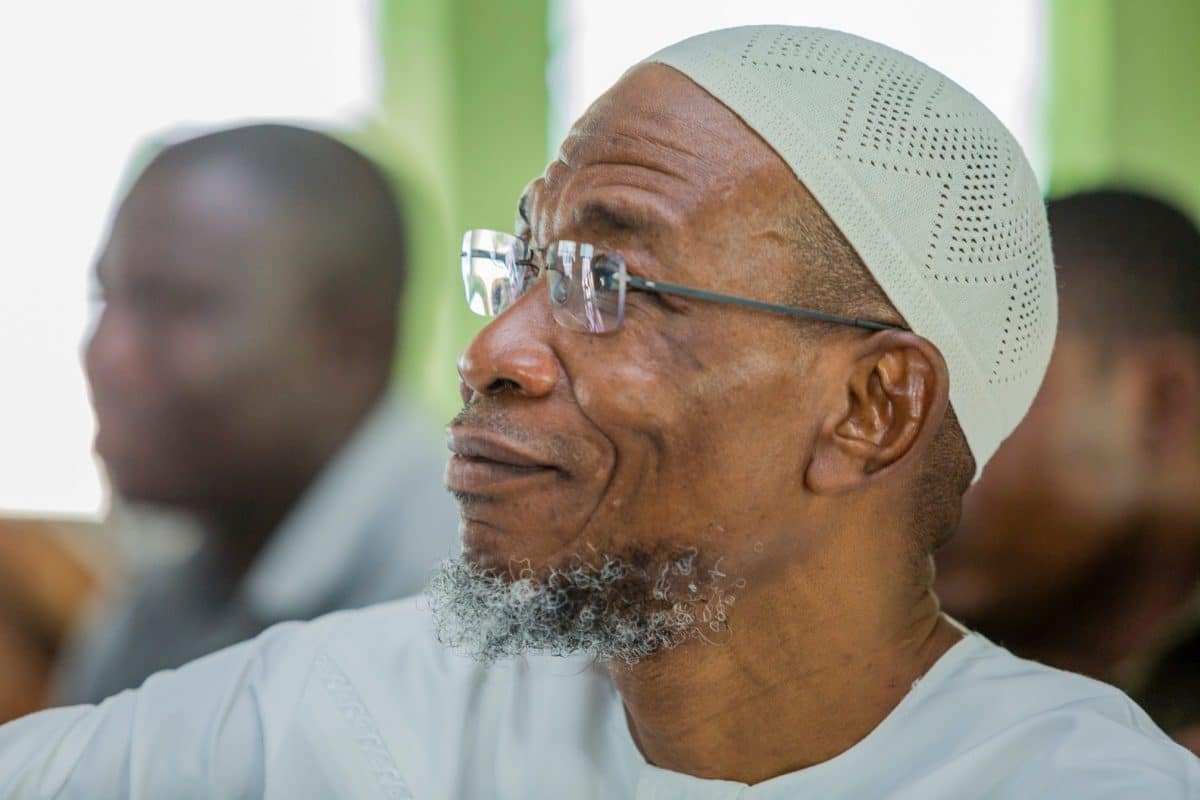 The members of Muslim Rights Concern (MURIC) has appealed to the Minister of Internal Affairs, Rauf Aregbesola to release the soldiers arrested in 2014 for daring to complain to their commander that their weapons were too poor to confront better equipped Boko Haram fighters.

Recall that the soldiers, who had earlier lost 23 men and four officers due to poor equipment when they advanced on Damboa on 9thJuly, 2014, demanded better supplies when they were ordered to return to the battle front again without improved weaponry.

They were sentenced to death in December 2014 for complaining and refusing to obey the last order but this was later commuted to ten years imprisonment.

The minister spoke at a public hearing organized by the National Assembly Joint Committee on Appropriation.

Although the minister laid emphasis on awaiting trial inmates, the Islamic human rights group wants him to extend the reprieve to those serving prison sentences, particularly the 54 soldiers.

MURIC made the appeal in a statement signed and made available to DAILY POST on Monday by its Director, Professor Ishaq Akintola.

The group agreed with the minister that Nigeria’s correctional centres are long overdue for decongestion.

The statement added, “The honourable minister has good intentions and the idea is quite laudable, visionary and humane. Available data indicates that more than 70% of inmates of correctional centres are awaiting trials.

“This has caused severe congestion forcing inmates to sleep in turn. They queue for hours in front of toilets. This is dehumanising, degrading and inconsiderate.

“Then comes the question of space. Our correctional centres are not large enough, neither do they have necessary facilities to retain a human face. 585 inmates jostle for 400 spaces in Ekiti.

“The space designed for 1,354 inmates in Rivers is being used by 4,424 inmates. Owerri Correctional Centre contains 2,500 instead of 550. This is why Aregbesola’s move to decongest the prisons could not have come at a better time.”

“With the total number of prisoners in Nigeria standing at 73, 631 as at 18th July, 2018 in a population of roughly 199 million one wonders why Nigeria cannot provide enough facilities in its correctional centres when its prison population rate is just 37 per 100,000.

“But we are asking the minister to extend the kind gesture to other prisoners based on merit. Our main interest lies in the 54 soldiers. These were soldiers arrested in 2014 for daring to complain to their commander that their weapons were too poor to confront better equipped Boko Haram fighters.

“They had earlier lost 23 men and four officers due to poor equipment when they advanced on Damboa on 9thJuly, 2014. This made them to demand better supplies when they were ordered to return to the battle front again without improved weaponry. They were sentenced to death in December 2014 but this was later commuted to ten years imprisonment.

“But Nigerians have since learnt that it was the 54 soldiers affair which exposed the massive corruption in the army with particular reference to armsgate. We therefore contend that the 54 soldiers should be seen as heroes and patriots instead of being treated as criminals who merely deserve to rot in jail.

“It is on these humane and compassionate grounds that we are pleading with the honourable Minister of Internal Affairs to kindly extend the decongestion exercise to the 54 soldiers. It is about our norms and values. Those who have toiled for our country should not be made to regret their sacrifices. It is demoralising.

“Apart from seeking greener pastures, our lopsided sense of justice is another raison d’etre for the migration of Nigerian youth to foreign lands. We castigate excellence and reward mediocrity. We worship indolence and demonise industry.

“We deride integrity but hail corruption. This kills gallantry in our soldiers and diminish patriotic instincts in our young ones. Instead of giving them ordinary panadol, Nigeria beheads its citizens for complaining of headache.

“Or how do we explain the sentencing of a 22 year old man to 30 months in prison for stealing a pair of slippers? Worse still, he was given no option of fine. Why should a poor citizen be jailed two years for stealing just one goat?

“How do we justify the death sentence handed down to four men for stealing only one phone worth N10,000? What is the rationale behind docking a JSS 2 student for stealing N200 from his classmate?

“These are questions begging for answers and we expect the minister to address this burning issue of gross injustice in the land particularly against the poor jamahiir (masses). The starting point should be the 54 soldiers. We strongly believe that they are victims of ego-massaging by senior officers.”

MURIC also brought the issue of the Presidential Advisory Committee on Prerogative of Mercy to the front burner.

“We are aware that the Federal Government (FG) on Tuesday 28th August, 2018 inaugurated the Presidential Advisory Committee on Prerogative of Mercy. The Committee is to assist President Muhammadu Buhari in the discharge of his constitutional responsibility of granting state pardon to deserving prisoners and ex-convicts.

“The committee has been going round the states and it is doing a great job. But we are yet to hear what the committee thinks of the 54 soldiers. It is our considered opinion that the 54 soldiers are eminently eligible for presidential mercy. It may be pertinent here to inform the honourable minister that a special appeal for clemency for the 54 soldiers was addressed to the Vice President’s office by MURIC in November 2018.

“Prisoners are being released in large numbers around the world. Former US president Barrack Obama released 6,000 prisoners on 30th October, 2015. Kenyan President, Uhuru Kenyatta, released 7,000 prison inmates in October 2016 to make room for corruption offenders. Sheikh Khalifa Bin Zayed Al Nahyan ordered the release of 935 prisoners ahead of Ramadan on 14th May, 2018. It is only in Nigeria that governors and chief judges release a paltry 8 or 9 prisoners and leave thousands in jail to waste away.

“We therefore expect Aregbesola to order the release of inmates in their thousands from each correctional centre. The minister had been an uncommon governor for eight good years and he had stunned Nigerians with his record-breaking performance. We are therefore expecting an equally uncommon, unprecedented and revolutionary decongestion of Nigeria’s correctional centres within the next six months. Indeed, we expect the release of at least 50% of the 73, 631 Nigerians who are presently in the correctional centres. This will fall in line with global best practices.

“Before we draw the curtain, we hail Aregbesola for planning to decongest the prisons. We appeal to him to take a compassionate, yet dispassionate look at the the case of the 54 soldiers with a view to setting them free.”