The popular  journalist identified as Fisayo Soyombo has stated that the Edo jailbreak that happened in the morning could not have taken place without the assistance of some of the prison officials.

Soyombo who once lived inside a prison cell as an inmate during an undercover investigation in 2019 said hoodlums or protesters can’t break into a prison to set prisoners free without the tacit support of prison security.

Reacting to the jailbreak via his Twitter handle, Fisayo wrote;

”As someone who lived eight days in prison as an inmate during an undercover investigation, I can tell you that unarmed protesters or hoodlums can’t break into a prison in Edo State or elsewhere and set inmates free. Ko possible, sir.

No largescale jailbreak can succeed without (i) the active connivance of prison insiders, (ii) the tacit support of prison security or (iii) the disguised involvement of prison authorities. When you’re ready to tell us the truth — or if you ever will — we’ll be here, waiting.” 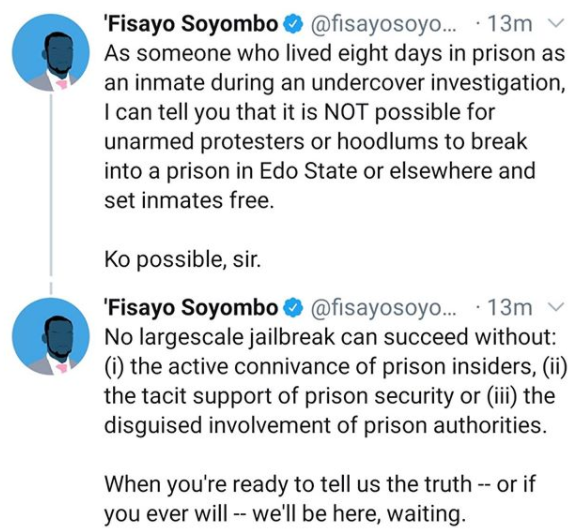