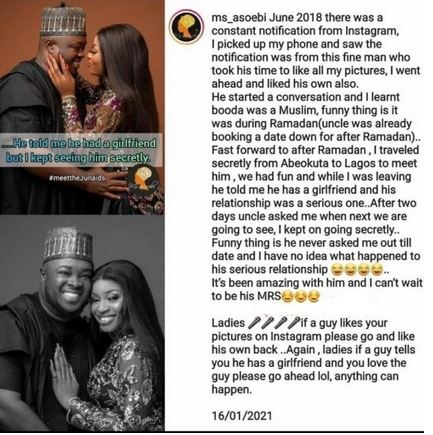 A woman has revealed how she met her husband-to-be while stating that despite being in a relationship, she was bent on securing him.

The bride-to-be, who shared their love story, narrated how the man liked multiple photos of her on Instagram so she went to his account and liked his too.

She said she travelled from Abeokuta to Lagos to see him and they had fun. When she was leaving, he told her he has a girlfriend and his relationship was a serious one.

She said she “kept going secretly” to see the man and they are now engaged to be married this weekend.

Advising ladies, she said, “Again, ladies if a guy tells you he has a girlfriend and you love the guy please go ahead lol, anything can happen.”

3 Killed As Hoodlums Fight Over Girlfriend In Kwara