The All Progressives Congress, APC, has asked Nigerians to disregard the ”fake lamentation” from the PDP over the corruption allegations leveled against Magu and the EFCC.

A statement released by the Deputy National Publicity Secretary of the APC, Yekini Nabena this morning July 13, argued that the PDP has no moral right to comment on the recent corruption allegation against Magu because the party who was in power for 16 years, is the founder of corruption in Nigeria.

The APC opined that the fact that Magu is being investigated by Buhari-led government should send a signal to those that have blackmailed the anti-corruption crusade of this administration.

”The All Progressives Congress (APC) wishes to assure all Nigerians that the administration of Muhammad Buhari will not condole any form of corrupt practices even as the administration is committed to fighting corruption as promised.

The former ruling party PDP does not have what it takes to lament about it’s alleged corruption practices in the present administration of APC. It is on records that the PDP is the founder of corruption in Nigeria .

to the extent that the evil practices were made official way of life during its 16 wasteful years.

In APC’s government nobody is above the law. For the fact that the suspended acting chairman of the EFCC Ibrahim Magu is being investigated should send a signal to all those who think and have blackmailed the government’s anti-corruption battle.

President Buhari hands over National Theatre to CBN. See why

The Nigerian President has assured that there is no hiding place for any corrupt government official in this administration being led by an incorruptible personality, in person of President Buhari.

So, Nigerians should ignore the fake lamentations of an unrepentant corrupt PDP. The main opposition party is only pained that it’s no longer in government, PDP does not have history of caring for the people even when the revenue generations were at the highest levels.” 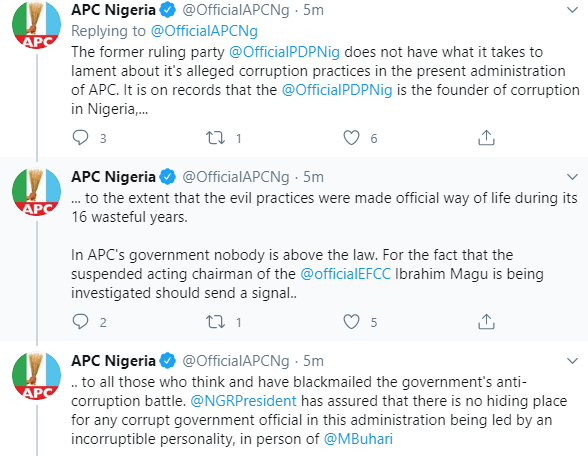